The smallest of 3,100 known species, this snake is as thin as a spaghetti noodle 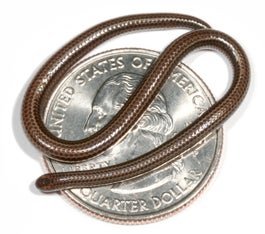 An evolutionary biologist at Penn State University has discovered a species of snake so small that it can fit comfortably on a quarter. The average adult of the species, a type of threadsnake named Leptotyphlops carlae, is less than four inches long. The discovery will be published in the August 4 issue of the journal Zootaxa.

Found in a remnant patch of forest on the Caribbean island of Barbados, Leptotyphlops is probably a rare species because most of its habitat has been cut down to make way for buildings and farms. Blair Hedges, who identified the tiny snake by its genetic signature and unique color pattern and scales, says that some older specimens of the species exist in museums but were misidentified by other scientists.

While larger snakes can lay as many as 100 eggs at a time, Leptotyphlops usually lays just a single, relatively huge egg. The snake that hatches from that egg is about half the size of an adult, while hatchlings of the largest snakes are only one-tenth the size of their parents. The reason for this disparity, Hedges says, is that tiny snakes must concentrate their efforts on producing offspring large enough to hunt and consume prey—in this case, the larvae of ants and termites. A snake much smaller than Leptotyphlops might not be able to produce viable offspring. 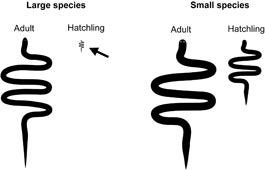