Thought to be an anglerfish, its two forward-facing eyes are a first for the fish world 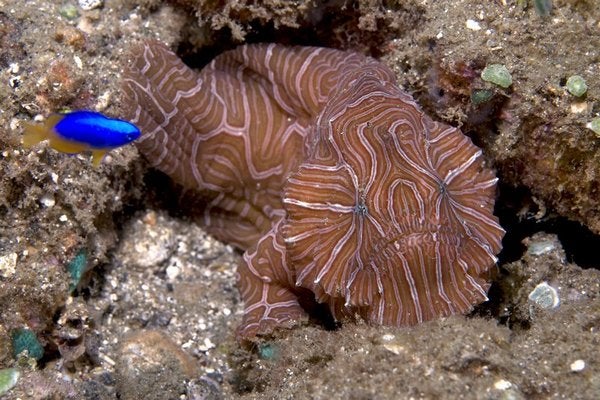 The flat face and leglike pectoral fin suggest that this newly found fish is an anglerfish.

Divers have spotted a new type of fish off Ambon Island in Indonesian waters. The striped fish, which is about the size of a human fist, is believed to be an anglerfish because it crawls along the ground and into crevices using leglike pectoral fins. But unlike most anglerfish, this species does not have a “lure” dangling from its head to attract prey, so it probably represents a family of fish previously unknown to science, says Ted Pietsch, a professor of aquatic and fishery sciences at the University of Washington.

Three scuba divers from Maluku Divers first spotted and photographed one of the fish in late January. In search of international experts to identify the fish, they found Pietsch, who says the fish is unmistakably an anglerfish because of the leglike fins on its sides. Anglerfish are also known as frogfishes and toadfishes. 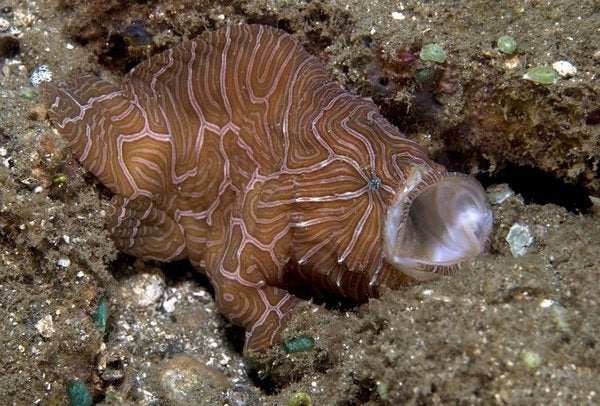 Yawning, perhaps to oxygenate its gills, reveals the inside of the fish’s mouth.

The fish’s most unusual feature is its flat face. Most fish have eyes on either side of their head, and Pietsch says he has never seen a fish with two forward-facing eyes in his 40 years of studying fish.

The new fish appears to be fleshy with tough skin, because it is able to squeeze itself into very small cracks in coral reefs without getting scratched. That may be how it has escaped human attention for so long.

The divers who discovered the fish kept quiet about it for a while. But now that another adult, two juveniles, and a mass of eggs have been seen, the word is out.