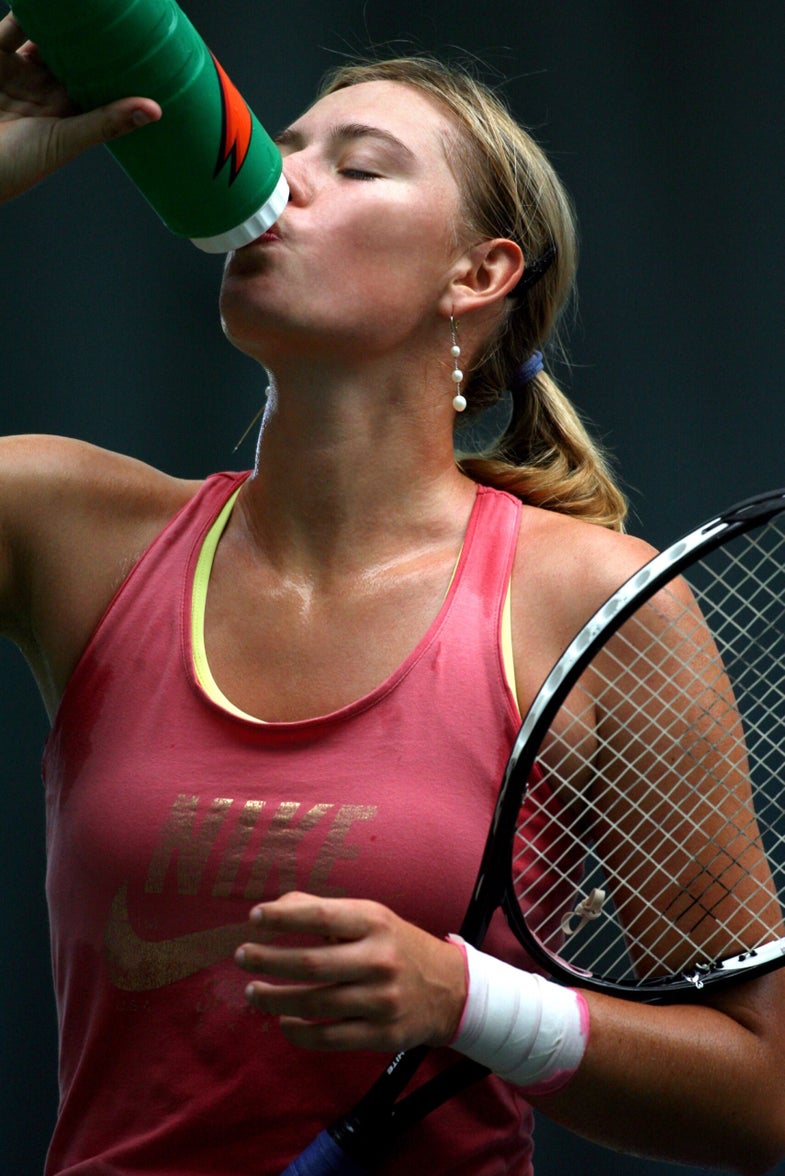 Over the years, researchers at the Gatorade Sports Science Institute (GSSI) have tested hundreds of elite and recreational athletes to better understand hydration. A few months back they stepped on court to analyze the sweat of the world’s fifth ranked women’s tennis player, Maria Sharapova. Tiger Woods went through a similar regimen in creating his own custom Gatorade formula, with fancy flavors set to launch this month. Ongoing tests on NFL and NHL players offer similar personalized suggestions on what to drink and when. To dig deeper into the science of sweat, and the perspiration habits of the lovely Ms. Sharapova, PopSci spoke with Beth Stover Mooradian, a senior scientist with Gatorade.

PS: Alright, so paint us an extremely vivid picture of this training session with Sharapova.

BSM: We went to a typical session she was having with her coach. We try to be as non-intrusive as possible. So when she arrives, we get a urine sample to assess her hydration status. That’s very important because if she’s dehydrated before she gets on the court, it can only get worse. Then we take her body weight and put the patches on her. As the patches become saturated we take the patches off and weigh her and the liquids that she drinks.

PS: And, what did you find inside the sweat of a six-foot blond Russian tennis player?

BSM: Pretty much what all athletes and humans have. The main electrolytes lost are sodium and chloride, and potassium to a lesser extent. Without getting specific to her testing, athletes tend to lose about one gram of salt per liter of sweat and a typical sweat rate for a trained athlete is a liter to a liter and a half per hour.

PS: But everybody’s sweat isn’t the same or you wouldn’t do this testing. What was unique about Sharapova’s?

BSM: Everyone is an individual. And so that’s why this testing is extremely helpful because we can give specific recommendations. They can vary a lot by the concentrations in your sweat and the actual sweat rate. Some people can lose ½ liter per hour and others can lose three liters per hour.

PS: Okay then, what would you expect to be different between an elite athlete’s sweating and if I were to run around on the court?

BSM: As you become more in shape you become more efficient in cooling your body through sweating. Elite athletes tend to have a higher sweat rate and also their sweat patterns are different. If you’re not in shape or heat acclimatized you tend to sweat more in your trunk or where your vital organs are. As you get more in shape you’ll sweat more in your extremities, so your arms and legs get sweaty helping dissipate that heat much quicker. Your sodium levels can change as well. Normally as you become fit the salt in your sweat will decrease, but there’s a huge genetic component in that as well.

PS: What about men versus women? Seems like men sweat more or maybe women just hide it better?

BSM: As of now we do tend to see that men are heavier sweaters but it’s hard to know if that’s an intensity difference or a genetic difference. A lot of time women working out won’t push themselves as hard. But among elite athletes we see similar sweating rates between men and women.

PS: How can the average Joe know if he’s hydrating correctly?

BSM: One thing you can do is to weigh yourself before and after exercise. That’s a good gauge for the amount of fluid to drink. If people are doing a good job hydrating they can lose nothing, but [on the other hand] they can lose between 10 and 13 pounds. For the sweat electrolyte concentration you can’t actually know, but there are tips to know if you’re a salty sweater: if your eyes burn when sweat gets into them or if you get white salt lines on your skin or your shirt. Some people even lick their sweat to get a sense of how salty it is. Those are the ones who need to be concerned, because it can result in whole body cramps and other problems.

PS: Is there a Holy Grail in hydration. Something you’re reaching for?

BSM: We’re always looking to make sure that Gatorade is the best available, yet with all the research we’ve done over 40 years, it looks like the simple formula of sugar, salt and water is really what works the best. I guess that’s the Holy Grail.

PS: Wait a minute you’ve done 40 years of testing, and you haven’t changed a thing?

BSM: Pretty much. We’ve done a little tweaking here and there, and we have developed other products like the endurance formula that has a higher level of electrolytes for those who are saltier sweaters.

PS: This new G2 Gatorade shows pictures of Sharapova in an attractive white dress. I don’t get it, why does Maria need to be hydrated when she goes out to dinner?

BSM: It’s to help athletes stay hydrated throughout the day. We find that 50%-75% of athletes are showing up to the games or practice dehydrated, so they’re starting off behind the eight ball. This is a bit lighter flavored and has half the carbs. We’ve found that people tend to drink more of it with that combination.

PS: So how many of those Gatorade tubs dumped on coaches are actually filled with Gatorade?

BSM: Ha, that’s a good question, I’m not sure. That would be a good stat to know though.