Would My DeLorean Fly If I Popped Its Gull-Wing Doors and Floored it?

We ask a racecar physicist to find out 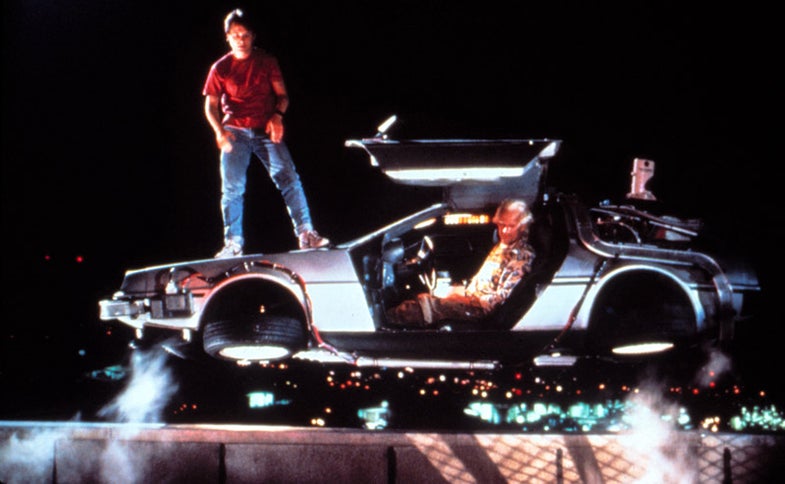 For any vehicle—airplane or car—to fly, there needs to be some force pushing it up so that it can overcome gravity. Airplane wings are specifically designed to create just such a force. As a plane moves forward, the wings push air down, and because for every action there’s an equal and opposite reaction, this action creates an upward force on the wing, called lift.

Cars are designed to fight lift, and a DeLorean’s “wings” won’t make up the difference. The doors aren’t shaped or angled to push enough air downward to create a significant upward force. They’re relatively short, so there isn’t much surface to push up on anyway, and they don’t protrude straight out, which is ideal for flying. Worse still, the doors’ bulky interior padding and the side-view mirror would create a good deal of drag. Not to mention that the doors would probably break off if forced to support the entire weight of the car.

Another strike against a flying DeLorean is that it’s exceptionally boxy, so even with the doors shut, its 20 or so square feet of frontal area (the part of the car that hits the most air) is greater than on most cars its size. Pop the gull-wing doors open, and you’re inviting air into the car, which makes for a huge amount of drag resistance. A DeLorean’s top speed of 105 mph (with doors closed) isn’t nearly enough to overcome this. Even if you installed a stock car’s engine and could get the car going 200 mph, it still wouldn’t take off.

But that’s probably a good thing. If you did somehow manage to get the car airborne, you’d have another problem: Once the tires left the road, there would be no force pushing the car forward. Drag—and gravity—would take over, you’d slow to the point where lift couldn’t keep you aloft, and not even a Flux Capacitor could prevent you from crashing back to the ground.

Diandra Leslie-Pelecky dissects the science of driving fast in her book The Physics of NASCAR.