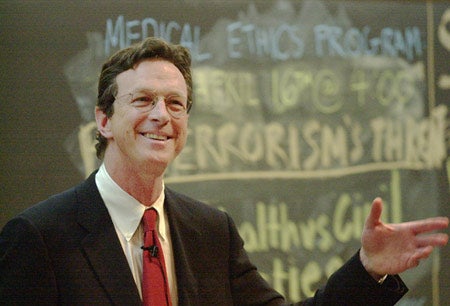 Michael Crichton, best known as the author of such books like Jurassic Park and movies like Westworld, died last night from cancer at his home in Los Angeles, California at the age of 66. He is survived by his wife Sherri and his daughter Taylor. A medical doctor with a degree from Harvard, Crichton’s works and movies brought science to a mainstream audience, introducing readers to concepts like cloning and chaos theory.

In many of the books, Crichton grounded the science fiction plot line in real world research, often crafting his characters as composites of actual scientists. Crichton also wrote non-fiction, including a computer-programming book in 1983. Lately there had been some controversy about Crichton’s writing when researchers criticized the scientific basis of his global warming facts in the 2004 book State of Fear.

Born in Chicago, Illinois in 1942, Crichton graduated with honors from Harvard, and later graduated from Harvard Medical School. In 1965, just 23 years old, Crichton served as a visiting lecturer of anthropology at Cambridge University in England. He began writing fiction while still in medical school, and published under the pen name John Lange.

The fast pacing and action set pieces of his books attracted the attention of Hollywood. In 1971 The Andromeda Strain, the first book written under his real name, became a feature length film. However, it wasn’t until the 1990s that Crichton became a household name and synonymous with box office success. Between 1990 and 2000, seven of his books were turned into movies that grossed a total of almost $2 billion worldwide. The first two Jurassic Park movies were the most successful of the adaptations, ranking not only as some of the highest grossing movies of all time, but also inspiring a generation of children to learn more about paleontology and genetics. He also created and produced the television show ER and wrote the screenplay for the movies Westworld and Twister. In 1994, Crichton hit the trifecta; writing the most widely read book, the most watched TV show and the highest grossing movie.

Nevertheless, Crichton was no stranger to controversy. In 2004, he found himself in the center of a maelstrom with the release of State of Fear. The book implies that global warming is a hoax and portrays some ecological activists as terrorists. Crichton later testified before Congress, saying that some scientists had covered up data that did not support the existence of climate change. For his global warming position, Crichton was denounced in Senate testimony by former Vice President Al Gore and in print by New Repblic editor Michael Crowley.