Precious metals in your car burn up the dirty exhaust, with no flame to be seen 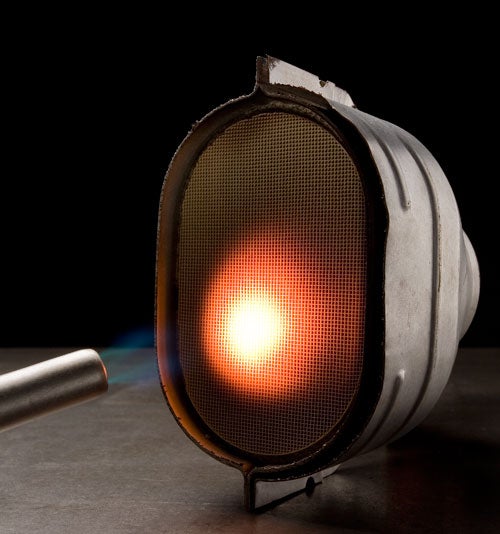 More Than Meets the Eye

Invisible propane gas flows, unlit, from a torch. On hitting the rhodium-studded ceramic honeycomb from a catalytic converter, it burns without flame, heating the ceramic red-hot.

To a chemist, burning means the rapid combination of a fuel with oxygen, called oxidation. You might say, for instance, “Oh, no, we didn’t have a fire at the nuclear power plant, we just had a ‘rapid oxidation event,’ ” a phrase that won officials at Three Mile Island the Doublespeak Award in 1979.

When gasoline or propane burns in air, the result is a bright flame—fire in the traditional sense. But there are other ways to combine these fuels rapidly with air. The catalytic converter in your car is a perfect example. Most contain a ceramic honeycomb studded with microscopic particles of platinum, palladium or rhodium. Among other functions, these metals split oxygen molecules that land on their surface into more-reactive single oxygen atoms, which can combine with fuel at a much lower temperature than in a flame.

In cars, this burns uncombusted fuel to reduce its polluting effect. But if you give a catalytic converter a richer stream of fuel—say, by blowing an unlit propane torch at it—it will glow red-hot for as long as you keep the gas on, even though the gas isn’t hot when it hits the ceramic and you see no flame.

This starts working only once the catalyst reaches a few hundred degrees, so you have to heat the ceramic first. I did this with a lit torch and then quickly turned the gas off and on again to extinguish the flame. It takes awhile to get the converter hot enough to do its job, which is one reason city driving creates more pollution than highway driving.

It’s unfortunate for automakers that this works only with very expensive metals. Ford Motor Company once lost a billion dollars speculating in the palladium market trying to secure a steady supply. But compared with cities full of smog, it’s a small price to pay.

Like what you see? For more Gray Matter, subscribe to our Gray-Matter-only RSS feed here or see the full list of projects at popsci.com/graymatter. And for Theodore Gray’s one-of-a-kind periodic table poster, head to periodictable.com/posters