The Day The Earth Stood Science

Reviews may be mixed, but the remake of the iconic 50s film does indeed put the science in science-fiction 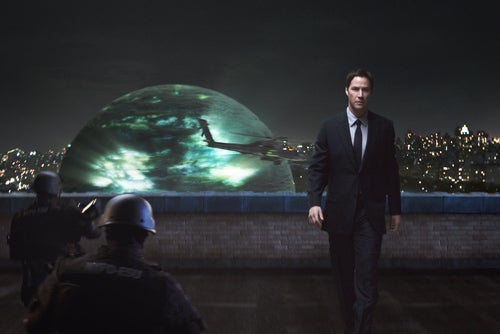 With the holiday season fast approaching, multiplexes have begun filling up with the Nazi-themed award magnets that always seem to flood the market at the end of the year. However, amidst the plethora of films filled with series English actors in sharp Teutonic uniforms a single high budget, special effects crammed movie squeezed into theaters on December 12th. The Day The Earth Stood Still, a remake of the canonical 1951 science-fiction film, switches out a widowed secretary for an astrobiologist played by Jennifer Connelly, and attempts to earn the science in science-fiction. So, does the science hold up?

The movie opens with Jennifer Connelly teaching a biology class on bacteria. Right off that bat, something seems out of place for a laboratory, and that something is Connelly. With her role as an astrobiologist, Connelly joins the likes of Cary Grant in Bringing Up Baby and Denise Richards in The World Is Not Enough as a scientist way too attractive for her profession.

That small point aside, though, the science hits the mark.

Director Scott Derrickson took extreme lengths to ensure scientific accuracy on set. A senior astronomer from the SETI institute—Seth Shostak—was hired to work on the script for about a month and a half.

“The main character is a scientist,” said Derrickson, explaining the importance of Shostak’s role. “Having respect for the profession of the main character just seems paramount to me. It will have an effect on how Jennifer does the scene.”

And indeed, Connelly’s opening lecture focusing on extremophiles—the class of bacteria that can survive in environments that would kill most life forms—feels (and is) completely accurate. If we do ever find alien life, it will probably be an extremophile, as they can live in the high acidity, radiation scorched, oxygen-deprived environments found on other planets.

The next big science scene comes when Klaatu, the alien messenger played by Keanu Reeves, goes to meet a Nobel Prize winning scientist played by John Cleese. Cleese had left some equations up on a chalkboard in his living room, and Reeves begins to make some corrects on the board. The equations are elements of relativity, and Klaatu gives mankind a hand by solving the equations, unifying quantum mechanics and relativity. Obviously, the math resolving quantum mechanics with relativity isn’t accurate, but the equations are actual relativity equations, provided by Marco Peloso, a physics professor at the University of Minnesota.

And part of Derrickson’s reasoning for this level of accuracy comes down, simply, to: “respect for people’s professions. My wife is a nurse, and I know how upset she gets when there are medical inaccuracies. She asks ‘how hard is it to take five minutes and get it right?'”

Of course, then there’s Gort, the 28-foot tall robot with the laser beam eye. Not a lot of science there, but hey, this isn’t an episode of NOVA, right?