An Israeli company wants to keep adults focused using a magnetic field to stimulate the brain. The technique, called transcranial... 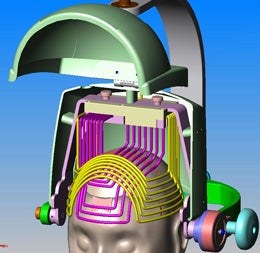 An Israeli company wants to keep adults focused using a magnetic field to stimulate the brain. The technique, called transcranial magnetic stimulation, involves hooking someone up to a device that creates a magnetic field. The field then induces an electrical current in specific brain regions, which activates that part of the brain. It’s worked for depression, and now may help the estimated 8 million adults with ADHD.

Despite sounding crackpot crazy, there’s a biological reason why this might work. The brain uses two different means of transmitting signals: electric pulses and chemicals. Drugs mess with the chemical part. Magnetic stimulation messes with the electrical part.

The method has proved useful for depression. Many legitimate researchers are testing magnetic stimulation for other problems (pain, schizophrenia, ringing ears), and at least one group is using it to study the nature of free will.

The company, Brainsway, will team up with the Veterans Administration Medical Center of Los Angeles to test the treatment’s safety and effectiveness in 20 adults with ADD. Hopefully the patients won’t come out with ringing ears.