A long walk on the right beach could reveal magnetite hiding in plain sight. 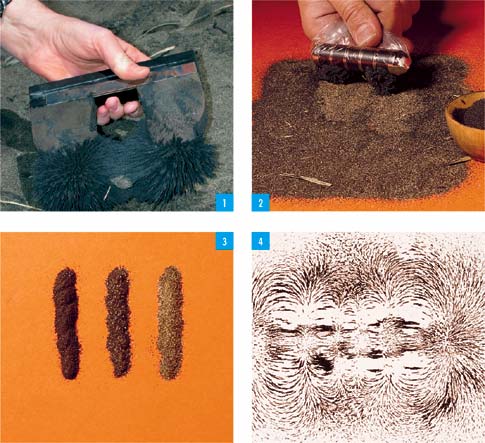 [1] Use a large magnet to pull the magnetite grains from the sand. [2] To get rid of extra sand and other debris, run a smaller magnet over the pile. (The plastic bag just keeps the magnet clean.) [3] Repeat Step 2 until your pile looks more like the pure magnetite (left pile) than the raw beach sand (right pile). [4] Magnetic field lines, which connect the north and south poles. Sprinkle your purified grains onto a sheet of paper with a magnet underneath to create a similar pattern.

You know that episode of Star Trek where Kirk is on some planet battling a lizard-man and he just happens to find the ingredients for gunpowder lying on the ground? Nature doesn’t usually give up elements that easily, but there are a few wonderful exceptions.

Take, for example, the many seemingly ordinary white-sand beaches that actually contain quite a bit of black magnetite, which is washed down from deposits in the hills and ground into sand by water. (Ironically, black volcanic beaches usually contain little or no magnetite.)

Hold a strong magnet an inch or two over one of these beaches and magnetite will literally jump out of the ground onto the magnet. It’s hard to believe until you see it. Sand and debris will come with the magnetite, but you can purify
it later by spreading it out on a sheet of paper and passing a magnet over it.

Iron producers used a similar process in the first half of this century to mine the now-protected magnetite-bearing beaches around Santa Cruz, California. The sand was dredged up and dumped onto staircased sheets with magnets underneath: Sand flowed off, magnetite stuck. It’s still mined in South Africa and a few other spots around the world.
After you purify your magnetite, try dropping particles directly on a strong magnet to build towers and arches with them (kids find this endlessly fascinating). A more scientific, or at least educational, application is to sprinkle it on a sheet of paper with a magnet underneath and watch the magnetite grains align themselves along the field lines that connect the magnet’s north and south poles. Amazingly, the Mars Pathfinder lander used a setup like this to identify types of magnetic dust on Mars. Of the likely components there, only magnetite forms visible field lines.

Pretty magnetic patterns, while undeniably alluring, are not why magnetite is my favorite element to collect from the wild. Next month, I’ll reveal the real reason, and how it could have helped Kirk with his lizard problem. Provided, that is, that he also had an Etch A Sketch.