The world's most famous sunken wreck becomes a boon for deep-sea microbiologists. 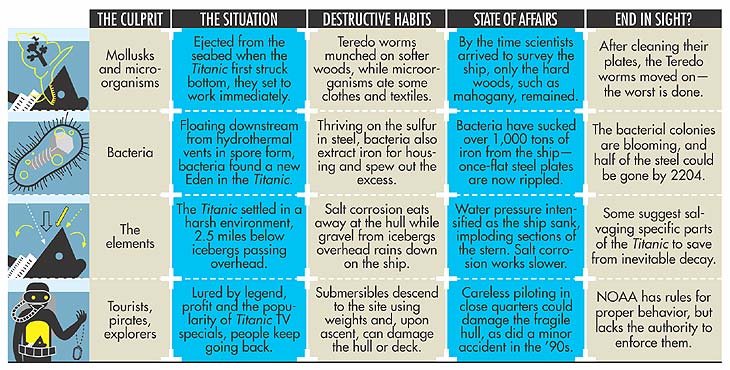 Oceanographer Robert Ballard is returning to the Titanic, but it’s not the same sunken ship he found in 1985. The deep ocean has been steadily dismantling the once-great cruise liner, and scientists say the process is unlike any they’ve ever seen. “Even if we could stop it, I wouldn’t,”says forensic archaeologist Charles Pellegrino. “The Titanic is becoming something that belongs to biology.”

The ship has proved an incredible draw for deep-sea life–Pellegrino says it’s like “a giant culture medium that fell out of heaven.”After the Titanic plunged 2.5 miles beneath the Atlantic Ocean in 1912, local mollusks quickly began devouring any organic material, including most of the soft woods, as bacteria steadily consumed the ship’s steel. Originating in the seabed and upstream hydrothermal vents, the bacteria have burrowed into cracks, consuming iron (400+ pounds a day) and excreting rust to form so-called rusticles–icicle-like housings that drape from the steel sections of the wreck. The feasting is so aggressive, scientist Roy Cullimore of Droycon Bioconcepts estimates 50 percent of the Titanic‘s steel will have been recycled back into the ocean within 200 years. Not to be outdone by rusticles, other critters (including tourists) are steadily chomping away at the ship too. Here, your guide to the wreck’s undoing.