A Football That Broadcasts Where It Is On The Field

Or, how to make goal-line technology work for American football 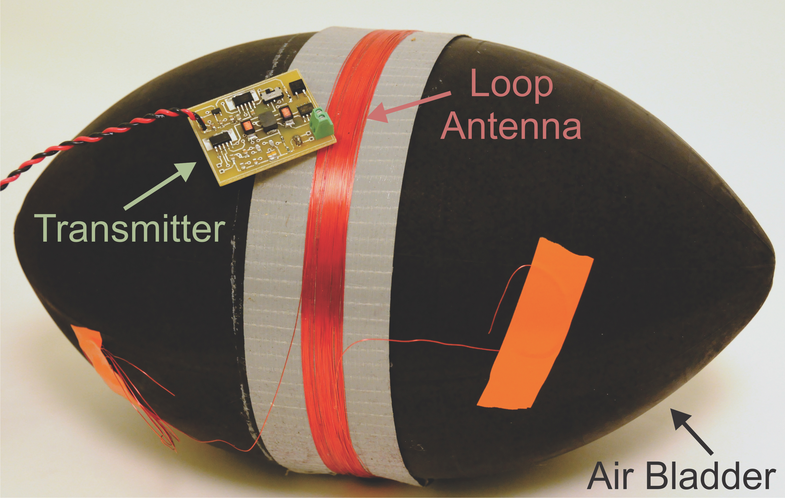 In this photo, researchers taped ball-tracking components to the outside of a football to show what the components look like. In gameplay, the transmitter and antenna are tucked inside the ball. David Ricketts
SHARE

A team of engineers has built a prototype tracker for a different kind of football than what’s in the news right now. The tracker overcomes one major difference between American football and soccer—the fact that in football, sometimes you have a half-dozen big guys pile on top of the ball.

Goal-line technology, like what the World Cup uses, relies on cameras set up around the field to watch where the ball goes. The cameras don’t exactly have X-ray vision, however, so they’re a no-go for pileups. On the other hand, with the new prototype tracker, “you can actually have all 22 people jump on top of the football,” says David Ricketts, an engineering professor at North Carolina State University who worked on developing the system. “You can see right through the players and see the football directly.”

Ricketts and his colleagues’ system includes hardware that sends out signals from inside ball itself. Sensors arranged around the field then triangulate the ball’s position from the signals they pick up.

It’s not a new idea to have a ball broadcast its position on the field. Ricketts and his team tried to bring the idea closer to reality by using a type of signal that’s safe, yet unobstructed by human bodies. Players’ bodies would interfere with GPS and RFID signals, Ricketts tells Popular Science. So the engineering team, including researchers from Carnegie Mellon University and Disney Research, decided to try something called magnetoquasistatic fields. (Disney is interested because it owns ESPN, who wanted to see if this is feasible, Ricketts says.)

“You can actually have all 22 people jump on top of the football. You can see right through the players and see the football directly.”

The football’s emitting components create a magnetic field that moves very slowly, which is why it’s called quasi—or seemingly—static. The slight movement helps sensors detect the field, and thus locate the ball.

One major challenge to using magnetoquasistatic fields is that when they contact the ground, they’re absorbed and re-emitted, creating unwanted signals the sensors pick up. Ricketts and his team wrote an algorithm to remove the effect of Earth from the signals their sensors read.

The North Carolina State University team has played with Ricketts’ and his colleagues’ system. Still, the system needs some improvements before it’s feasible for real games. It needs to be more accurate. For now, it can track a ball on a football field within about two feet of its actual location. For the system to be useful to umpires and game-watchers, it needs to be accurate within about half a football’s length. Teams might also want the emitting device in the football to be smaller and lighter. These kinds of improvements will need to wait for a commercial lab, however.

Meanwhile, Ricketts’ academic team plans to continue to research magnetic fields for tracking objects. Besides ball tracking, Ricketts imagines other uses for this technology. It could track people’s gestures for games, devices, or giving feedback to athletes. It could also help companies keep tabs on boxes and inventory.