Understanding their movements could help us pick the best sperm 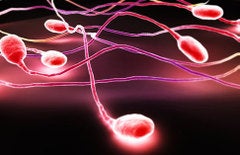 In movies and TV shows, a sperm’s journey to fertilize an egg is often portrayed as an elaborate race course as it competes with millions of others to move through the hostile environment of a woman’s reproductive tract. That’s not too far from the truth, and in recent years researchers have turned their attention to how sperm swim in order to better understand why only certain sperm make it to the egg. Now scientists have discovered that sperm slither side to side like snakes, according to a study published this week in Nature Communications. That knowledge could help researchers pick the strongest swimmers to use in fertility treatments for couples having trouble conceiving.

A few years ago, researchers discovered that sperm tend to stay close to the walls of the reproductive tract, avoiding the middle part. But they weren’t sure how the sperm were swimming that way, especially because they were thought to mostly move in a three-dimensional corkscrew-type motion.

To get a better look, researchers from the University of Toronto used total internal reflection fluorescence (TIRF) microscopy, a technique that allows them to look at the 3D movements of particles in fluid within 100 nanometers of a flat surface. The researchers compared the movements of human and bull sperm in liquids of varying thickness, or viscosity. They found that sperm from both species would intermittently slither like a snake, moving their “tails” back and forth on a two-dimensional plane—the first time such a movement has been observed in sperm. When the liquid was more viscous, the human sperm moved this way more often, and moved 50 percent faster than the bull sperm. The researchers think that the human sperm might have to slither more often because human reproductive tracts are smaller and more confined than those of cows.

These findings could be important for fertility treatments—in-vitro fertilization, for example, currently relies upon just a few sperm to fertilize the eggs. And since low sperm count or poor-quality sperm account for 90 percent of male infertility cases, it’s important that doctors pick the right sperm for an expensive IVF procedure.

The researchers have a few more questions to answer before they can start to apply their findings to clinical settings—like whether all or only some sperm slither, or if slithering is advantageous for the sperm to win the race to the egg. They are conducting these trials now, which one researcher compared to the “sperm Olympics” in a press release.