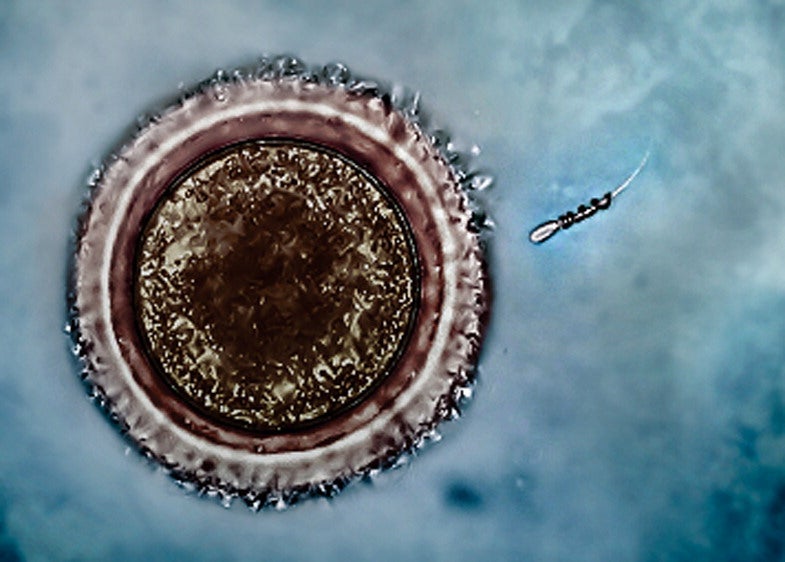 For the millions of American couples that struggle each year to conceive a child, most procedures, such as in vitro fertilization and artificial insemination, have a relatively low success rate. Male fertility issues contribute to about half of the cases of infertility. One major cause is low sperm motility, or the sperm’s inability to swim to the egg. Now a team of German researchers has invented a “spermbot” that can help sperm swim better to improve couples’ fertility, according to a study published recently in the journal Nano Letters. Ideally, this technique would also be less costly than other assisted reproductive technologies, which can cost thousands of dollars per round.

The invention is a small metal spiral that is just large enough to fit over the tail of the sperm but not so wide as to slip over its head. Using a rotating magnetic field, researchers can direct the spiral to an individual sperm, and then use it as a motor to drive the sperm next to the egg. The sperm can then fertilize the egg, and the micromotor can simply slip off the sperm. The magnetic field doesn’t cause harm to any of the cells involved, the researchers write, making it perfect to use on living tissues.

When tested in the lab, the motors effectively moved healthy sperm from one spot to another, with minimal damage to the sperm themselves.

The researchers note that lots more work needs to be done before the spermbots could be tested on people. The researchers are searching for a way to see the motors’ movements inside the body so that they can direct them towards the egg, a feat that is not yet technologically possible. The researchers are also not sure how the woman’s immune system would respond to micromotors introduced to her body. The motors themselves, too, could stand to be improved so that they don’t damage any of the sperm. And while the researchers could see the motors’ utility for procedures like in vitro fertilization, where sperm fertilizes an egg in the lab, they’re striving for an application in the “natural environment” of the human body.