Counting down to the Artemis 1 launch, NASA’s biggest moon mission in decades

This super powerful rocket won't carry people—instead, two fake torsos will be on board. 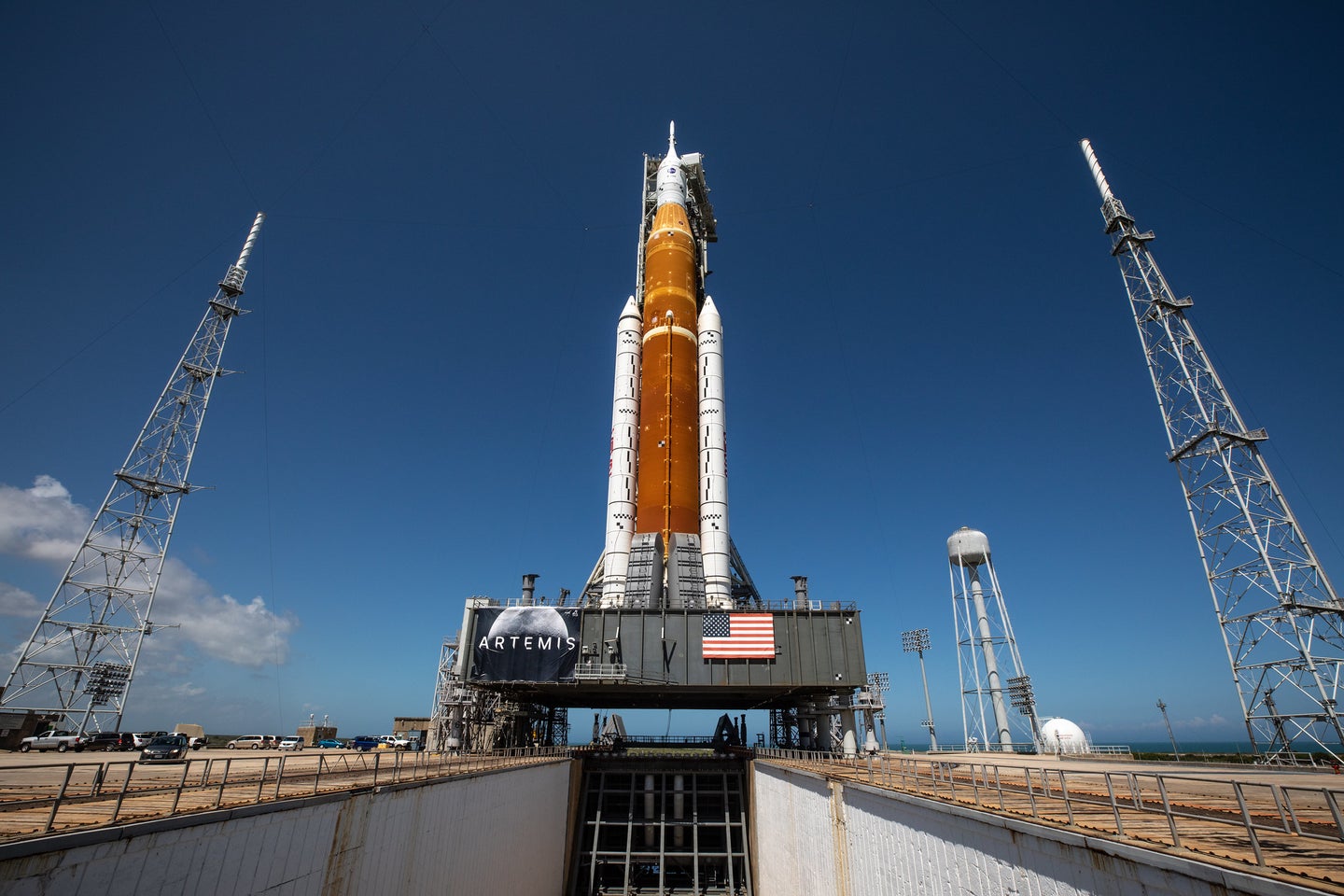 After facing cancellation, resumption, Congressional hearing drama, COVID-19, technical delays, and more technical delays, NASA’s decades-long push to return to the moon is finally about to get off the ground.

If all goes well, the Artemis 1 flight is about a month away. It’s slated to launch in late August or early September, put itself into the moon’s orbit, then return to Earth. On top of being the first entry in NASA’s newest spaceflight program, it’s an important test of the long-awaited Space Launch System (SLS)—a heavy-lifter of a rocket comparable to the old Saturn V—and the Orion command module that will one day house astronauts.

“The team is beyond excited,” says Cliff Lanham, an operations manager at NASA’s Kennedy Space Center on Florida’s east coast, where Artemis 1 will launch. “We still have a few weeks of work to do, so we gotta temper that.”

Here’s what’s going on with the launch—and what has to happen first.

You might remember that, a few months ago, NASA had some issues with fuel leaks that called off test runs.

NASA engineers called those tests “wet-dress rehearsals” (WDR). They were what they sound like: placing the rocket on the pad and going through the motions of launch day. The WDRs’ other purpose was to suss out issues like those very leaks, which aren’t exactly uncommon with highly complex systems such as large rockets.

The WDRs are quietly very useful; workers at NASA use the results to write the checklist for the Artemis 1 launch. It’s perhaps not the most glamorous step of launch prep. But without these trials, the rocket launch likely couldn’t happen.

After some tinkering, NASA held the final tests in June. Despite another fuel leak, engineers elected to call it there and end the tests, believing they could resolve the issues by returning the rocket to its assembly building for repairs.

One month to launch: Readying the rocket

Engineers still need to complete a few tasks before they can send Artemis 1 on its way.

A critical one is to charge up the rocket’s batteries, whose power SLS draws upon to control its components. But those batteries have a limited life, and engineers can’t fill them too early. Lanham says that charging those batteries is a careful balancing act of planning for an uncertain launch date.

Furthermore, although Artemis 1 won’t have any human crew, its Orion capsule will carry a trio of passengers: three mannequins, dummies that’ll test the elements human astronauts will face on their lunar journeys.

Already, the first of those has boarded. Its name is Moonikin Campos. It bears accelerometers and vibration sensors to test how rocky the ride will be, as well as detectors that measure radiation exposure on the lunar flightpath. Before the launch, two fake torsos will join, outfitted with test vests that future astronauts might wear in order to mitigate that radiation.

NASA will also load a Snoopy plushy—the zero-gravity indicator, which will float when the rocket is in space—and a Shaun the Sheep doll that’ll ride with the mannequins around the moon and back.

One week to launch: Checking the calendar

NASA can’t just plop the 5.8-million-pound Artemis 1 on the pad at a whim. Many factors have to come together for a successful launch, and the rocket is only one of them. Earth, moon, and sun have to be in the right spots so the spacecraft’s flight maneuvers get it to the proper place. The sun is especially critical, because Artemis 1 is powered in part by solar panels.

Selecting one of those dates will likely happen just days before launch. The US Navy, which recovers the fallen husks of discarded rocket stages, has to be ready. The pad, also used by SpaceX vehicles, has to be clear of other rockets. And the weather has to be cooperative. “We’re in hurricane season down here in Florida,” Lanham says.

[Related: This is why rocket launches always get delayed]

If none of those dates pan out, the next opportunities will come in late September or early October. If that again doesn’t work out, there’s another set of openings in late October. NASA officials hope it won’t come to that. Artemis would have to dodge a partial solar eclipse that could compromise its solar power.

After the launch: A lunar future

“NASA’s had a number of lunar return programs that have never made it past PowerPoint slides,” says Casey Dreier, a space policy adviser for the Planetary Society.

Artemis 1, if it’s successful, will refute that pattern. And Dreier says there’s good reason to be optimistic about this particular attempt. Despite the Artemis program’s ballooning costs, returning to the moon is a prospect that enjoys broad support in Washington that crosses political party lines and presidential administrations. They’ll no doubt be happy to see their support finally paying off.

Then, assuming Artemis 1 is successful, it will be just the first mission of a much larger list. “This is not really the culmination,” says Lanham. “It’s just the beginning.”

The timeline of the first crewed Artemis 2 mission—which will fly around the moon and return to Earth, much like Apollo 8—is still hazy, but current plans have it launching around 2024. After that would come the first human steps on lunar soil since 1972.

“The lunar landings have almost receded into myth at this point,” says Dreier. “For the first time, we have a real, viable chance at seeing humans walk on the moon again.”