2022 mission to a double asteroid could be a trial run for a deflection mission. 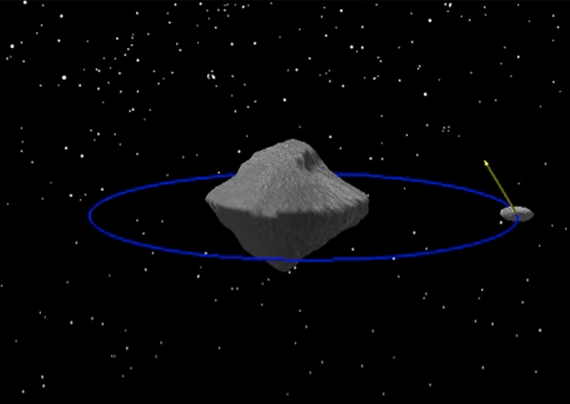 A European mission to intercept and deflect an asteroid now has a target: asteroid Didymos. The proposed Asteroid Impact and Deflection Assessment mission couldn’t have had better timing, sounding a call for proposals in the days before a huge meteorite exploded above northern Russia and an even larger chunk of space rock gave Earth a close shave.

The European Space Agency has been working on its AIDA concept for a couple years, designing a two-part mission that would send two spacecraft to a double asteroid target. One small spacecraft will smash into an asteroid at 14,000 MPH, and the other will record what happens to the space rocks’ orbital dance. The goal is to characterize how an object’s orbital mechanics would change if it’s disturbed by an impactor. This will help scientists trying to determine how space debris might affect a satellite, or it could be a first step in determining whether an asteroid deflection mission could work, should we need it.

Didymos is a binary asteroid, with two asteroids orbiting each other. One is roughly a half mile across and the other is about 500 feet across. Many asteroids have small moons or orbital companions.

It doesn’t pose any threat to Earth, but it will come close enough in about 9 years for ground-based telescopes to spot it. That will help astronomers verify the impact dynamics after one of the two spacecraft smack into it. You can read more about AIDA here.