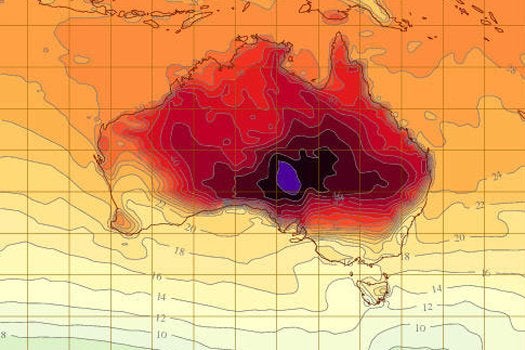 It’s going to be a rough week in Australia, where the weather service had to add new colors to their climate map in preparation for an extreme heat forecast. The Bureau of Meteorology recently added pink and purple areas to its maps to make room for higher temperatures.

On the map issued for next Monday, Central Australia gets the dubious distinction of being the first region shown in purple, meaning temperatures are likely to rise above 50 degrees Celsius (122 Fahrenheit). This last Monday was the country’s hottest day on record nationwide, with average maximum temperatures around the country of 40.33 degrees, and officials expect more to come. The new pink code is reserved for temperatures from 52 to 54 degrees Celsius, more than 125 degrees Fahreinheit.

Australia’s all-time record for highest temperature, set in 1960 in Oodnadatta, still hasn’t been broken, but this year’s heat has been uniquely widespread and intense. Between the heat and the dry vegetation conditions, conditions are ripe for wildfires, which have broken out in multiple states, and Prime Minister Julia Gillard warned yesterday that global warming will mean even more extreme weather events.