One of the simplest and most common physical objects is your average crystal, a collection of atoms arranged in an... 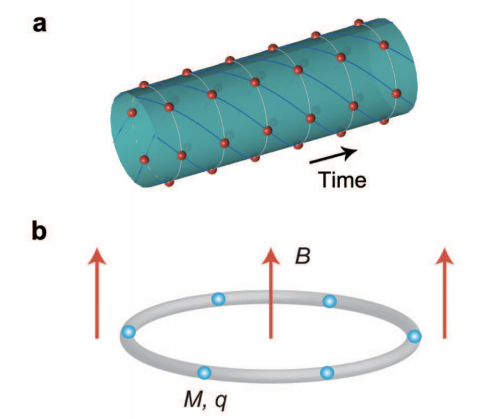 One of the simplest and most common physical objects is your average crystal, a collection of atoms arranged in an orderly, repeating three-dimensional pattern. Salt, snowflakes, and the quartz in your watch are all crystals. Earlier this year, the Nobel laureate and MIT physicist Frank Wilczek proposed that the fourth dimension can be crystallized, too: There can be space-time crystals. And now a team of physicists has proposed a way to build one.

This is highly strange, but the physics make sense, according to Wilczek’s theory, which he published on the arXiv server back in February. A spacetime crystal would simply be a physical object whose regular, periodic atoms move in a regular, periodic pattern. They would move forever, with no external input.

A basic time crystal could just be a circular arrangement of regularly ordered atoms that move around to the same spot at regular intervals. Now Tongcang Li at the University of California-Berkeley and some colleagues have described just such a system.

They propose a cloud of beryllium ions trapped inside an electromagnetic field, which forces them into a circular pattern. The ions all have the same charge and so repel each other, naturally ordering themselves in equilibrium. This is simple enough.

But if Wilczek’s theory is right, these highly organized atoms would also move around, even when they’re cooled almost to absolute zero. That’s because the magnetic field would give them a small nudge, setting them in motion forever. The very fact of their rotation gives them a time dimension.

Wilczek argues that a system in its lowest energy state, probably a little bit above absolute zero, would be frozen in space — so if it were to move, it would violate time symmetry. Think of a superconductor, for instance, which carries a current even at its coldest, lowest energy state. (Wilczek’s paper also discusses the time element in a quantum mechanical system, which forces you to think about imaginary time, or iTime … so we’re not going into that). He just couldn’t determine how you might actually build such a system.

Li et al.’s rotating beryllium atoms would rotate forever at the same rate, so long as the electromagnetic field in which they’re suspended still exists. This sounds like perpetual motion, but it’s not a perpetual motion machine, because there’s no energy output you could obtain from these atoms — they’re already at the lowest states of energy possible.

The practical implications could extend to better clocks — a perpetually moving, forever-regular pattern would be a very accurate timekeeper indeed. All you would need is a really good ion trap.