Much of the oldest and best science fiction stories and novels are, sadly, long out of print. The only way... 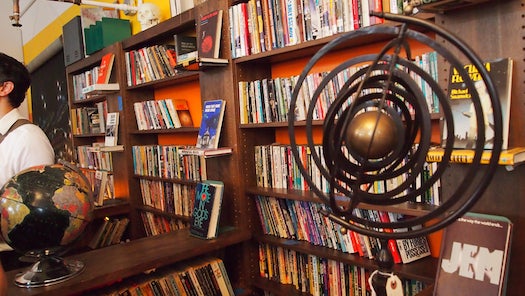 Much of the oldest and best science fiction stories and novels are, sadly, long out of print. The only way to read them is to dig through second-hand bookshops, rummage sales, or dusty attics, or hope that the local library still keeps their old paperbacks around. A group in Brooklyn called Singularity&Co. wants to change that. The attack is two-fold: raise some of these long-lost stories from their graves and release them as e-books, and showcase some really killer hardcovers and paperbacks at an honest-to-god brick-and-mortar bookstore near the East River. Being a dedicated sci-fi nerd, I felt obligated check it all out for myself at their grand opening last night.

Here are the basics. Singularity&Co. is a small, Kickstarter-funded start-up that aims to publish one out-of-print title a month, available for download on a variety of platforms. They’ve released two so far: A Plunge Into Space by Robert Cromie and The Torch by Jack Bechdolt. The work isn’t always easy–tracking down an authors’ estate, any copyright holders on the cover art and sometimes even scannable copies of the books themselves has proved challenging. For example, there are only seven known copies of what will eventually be the group’s (as yet unannounced) third book release, explained co-founder Ash Kalb, and he had to take a thousand-mile road trip to get a look at a pristine copy. I asked Kalb who his “dream authors” would be to be for the Singularity&Co. e-book project. He answered first with “Heinlein” but when pressed for something more obscure, he came out with New York City-native and Futurian, Cyril M. Kornbluth.

The air conditioning at Singularity&Co.’s new location in DUMBO (18 Bridge Street) was no match for the crowds, and it was tough to mingle due to so many people packed into a modest space. But I did get a chance to chat with two of the project’s founders, a couple of the partygoers and, totally randomly, one of my favorite cover illustrators, Greg Manchess–just one of the luminaries who’ve supported this project since its inception on Kickstarter (Neil Gaiman and Ken MacLeod are also fans). 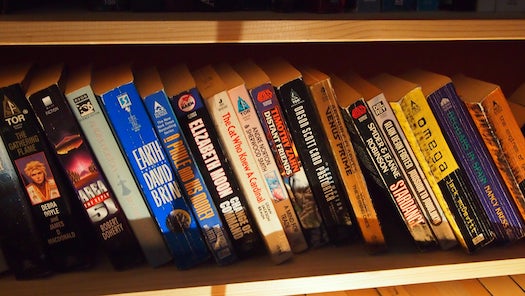 The shop itself is organized in an interesting way that caters to hardcore SF fans, but will be frustrating as hell to sci-fi n00bs with Internet-suggested reading lists: books are broken into publication decade and then alphabetically, so you’re going to have to know when an author was active if you’re looking to, say, read all of the available works of Ursula K. Le Guin. That said, organizing by decade allows the casual browser to sift through books that might be thematically, stylistically or tonally linked—60s sci-fi has a markedly different flavor than that from the 80s—rather than making the person muddle through a strictly alphabetical arrangement to find the
perfect book to fit a mood or preference. Other genres make an appearance, with a few shelves dedicated to horror (I found an HP Lovecraft collection and Fevre Dream by George RR Martin pretty much immediately) and about half-a-foot of shelf space dedicated to “Sexy Times.” The shop’s numerous Piers Anthony’s books were not shelved there, but for everyone’s sanity, they probably should be.

In all, I came away impressed. The book selection at the store is good and runs the gamut from the obscure to the overrated, and for anyone who is new to the genre, that’s exactly what you need in a specialty bookshop. I saw Stross and Scalzi books displayed as prominently as Clarke and Asimov. I can’t wait to see what the upcoming e-books will be. And I’m glad that someone is trying to build a space where fans old and new will want spend time and argue over whether the Ringworld really is unstable.