Bio-Manufactured Bricks Are Made at Room Temperature From Bacteria, Sand and Urine

An American architecture professor in Abu Dhabi has come up with a new generation of sustainable bricks — grown by... 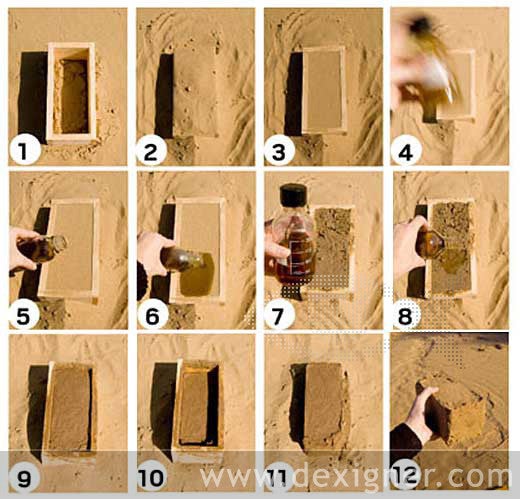 An American architecture professor in Abu Dhabi has come up with a new generation of sustainable bricks — grown by bacteria using sand, calcium chloride, and pee.

Rather than being fired in a kiln, the bricks are formed at room temperature, according to Metropolis Magazine, which honored the invention with a Next Generation Design award.

There’s still some work to be done, because the bricks can be poisonous to groundwater. But the concept is simple enough.

The bricks are made in a process called microbial-induced calcite precipitation, or MICP. In a chain of chemical reactions, the microbes on sand are joined together like glue. The resulting brick looks like sandstone, but is as strong as clay-fired brick or even marble, Metropolis Mag says. The ingredients include common bacteria and urea, a principal ingredient of human urine.

Ginger Krieg Dosier, an assistant architecture professor at the American University of Sharjah in the United Arab Emirates, came up with the recipe. After several periods of trial and error, she found a formula that assembled into a “baby brick.” The key was letting the bacteria sit for a long enough period.

For now, the bricks are tiny — about Lego-sized — but the concept could translate to a larger scale. They take about a week to grow, Metropolis Mag says.

The downside is that microbial-induced calcite precipitation produces vast amounts of ammonia. Microbes convert the ammonia to nitrates, which poisons groundwater. To solve that problem, Dosier plans to design a system that would capture emissions and recycle them back into the brick-production cycle.

Despite the challenges, the bacteria-bricks are a promising solution to a lasting architectural problem, Metropolis Mag says. More than 1.3 trillion bricks are manufactured worldwide every year, and many are hand-made in coal-fired ovens. Brick-baking is a major source of carbon dioxide emissions.

But they’re sturdy and cheap, meaning environmentally sustainable ones are harder to come by.

One of the first “green” bricks, honored with a PopSci Invention Award, is made from fly ash, the byproducts of coal-fired power plants.

Others include bricks made out of recycled plastic bottles and old tires, but they’re being used for things like fences and skylights, not building foundations.

The traditional brick industry is catching on, highlighting its own green practices in an industry blog. Last year, the Brick Industry Association used funds from the Environmental Protection Agency to evaluate the possibility of using methane from landfills in brick production.