The James Dyson Award winners for 2011 have been announced, and the grand prize winner is a piece of clever … Continued 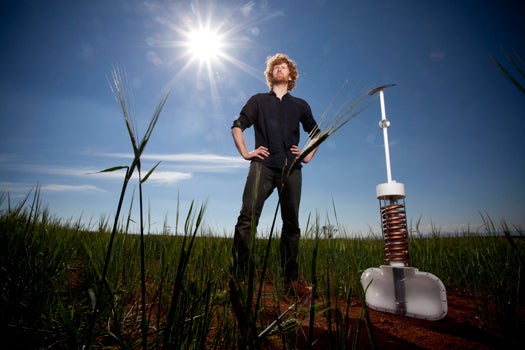 The James Dyson Award winners for 2011 have been announced, and the grand prize winner is a piece of clever biomimicry that sits so perfectly in our wheelhouse that we couldn’t resist the urge to write about it. Edward Linacre of Swinburne University of Technology in Melbourne has tapped the Namib beetle–a desert dwelling species that survives in the most arid conditions on Earth–to create an irrigation system that can pull liquid moisture straight out of dry desert air.

Airdrop, as the system is known, borrows a trick from the Namib beetle, which can live in areas that receive just half an inch of rain per year by harvesting the moisture from the air that condenses on its back during the early morning hours. A hydrophilic skin helps to snare water molecules passing on the breeze, which then accumulate into droplets of consumable liquid water.

Airdrop mimics this idea, though on a larger scale. The self-powering device pumps water into a network of underground pipes, where it cools enough for water to condensate. From there the moisture is delivered to the roots of nearby plants. Linacre’s math shows that about 11.5 milliliters can be harvested from every cubic meter of air, and further development could raise that number even higher.

Such a system could provide regular moisture to plants being grown in the world’s driest regions. And because it is low cost and self-powered, there’s not a lot of investment or maintenance involved in deploying Airdrop. The $14,000 award from Dyson (Linacre’s university also gets an additional $14,000) should help speed that along.

This year’s runners up included a quickly deployable divider for medical settings that lets healthcare professionals make the most of available space and an aide for the blind that uses a special cane and location-based social networking apps to help the visually impaired locate their friends. All of this year’s entries can be seen here.