The current widely-held theory of life, the universe, and everything holds that at some point roughly 13.7 billion years ago... 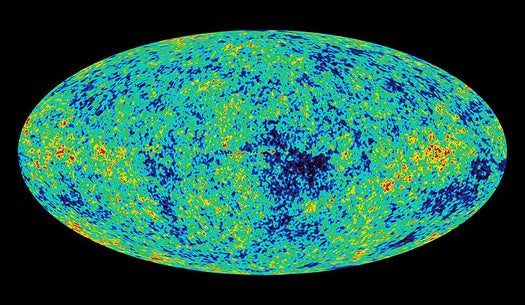 The current widely-held theory of life, the universe, and everything holds that at some point roughly 13.7 billion years ago everything that now is was packed into a tight little package from which sprung the Big Bang, which violently hurled everything into existence. But 13.7 billion years to get to where we are isn’t enough for renowned physicist Sir Roger Penrose, and now he thinks he can prove that things aren’t/weren’t quite so simple. Drawing on evidence he found in the cosmic microwave background, Penrose says the Big Bang wasn’t the beginning, but one in a series of cyclical Big Bangs, each of which spawned its own universe.

By Penrose’s estimation, our universe is not the first – nor will it be the last – to spawn from a dense mass of highly-ordered everything into the complex universe we see around us. In fact, it’s that high degree of order that was apparently present at the universe’s birth that set him on this line of thought. The current Big Bang model doesn’t supply a reason as to why a low entropy, highly ordered state existed at the birth of our universe unless things were set in order before the Big Bang occurred.

According to Penrose, each universe returns to a state of low entropy as it approaches its final days of expanding into eventual nothingness. Black holes, by virtue of the fact that they suck in everything they encounter, spend their cosmic lifetimes working to scrub entropy from the universe. And as the universe nears the end of its expansion the black holes themselves evaporate, setting things back into a state of order. Unable to expand any further the universe then collapses back in on itself as a highly ordered system, ready to trigger the next Big Bang.

There are crazier theories out there, but as creation stories go it sounds relatively sane, and Sir Penrose claims he’s found the evidence he needs to bolster his cyclical universe hypothesis in the cosmic microwave background. The CMB is believed to have been thrust into existence when the universe was just 300,000 years old, and as such it’s treated as a kind of record of the state of the universe at that time.

The current model of the universe says any temperature variations in the CMB should be random, but Penrose claims he and a colleague have found very clear concentric circles within the CMB, suggesting regions where the radiation has much smaller temperature ranges. These, he posits, are spherical evidence of the gravitational effects of black hole collisions during the previous universe. The circles fit well in his theory, and not so well in the standard inflationary theory.

Of course, it’s not all that simple and Penrose has by no means shattered the foundation of modern physics. Not yet, anyhow. Peers will read his paper critically, and he still has some loose ends to tie up and some assumptions to prove. But it’s fun to try and wrap one’s head around it all. And if you’d care to give that a try, you can get a PDF of Penrose’s paper here.