For Test-Tube Babies, Synthetic Environment Could Cause Lasting Genetic Damage

Thirty-two years after the birth of the world’s first test-tube baby, artificial conception has never been more popular or successful.... 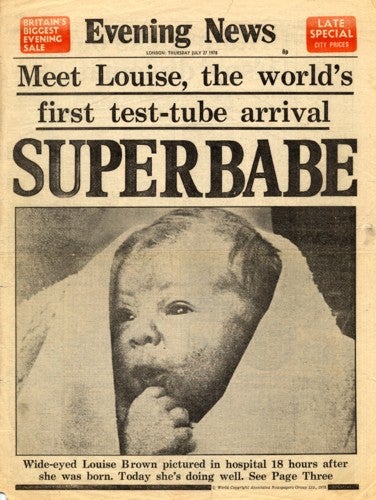 Thirty-two years after the birth of the world’s first test-tube baby, artificial conception has never been more popular or successful. Today, up to 3 percent of infants born in the U.S. owe their existence to assisted reproductive technology, or ART. The majority is overwhelmingly healthy, but new research from scientists at Temple University and other institutions suggests the technique is not without its long-term risks.

Speaking this weekend at the AAAS conference in San Diego, Temple geneticist Carmen Sapienza told press members that children conceived through ART are more prone to low birth weights, birth defects and genetic abnormalities, contrary to previous studies showing little or no differences between lab-made babies and those conceived the old-fashioned way. Carmen’s research evaluated the impact of the environment on gene expression—a red-hot field known as epigenetics—and revealed distinctive chromosome modifications in placenta and cord blood taken from children conceived in vitro. In turn, these altered chromosomes created heritable changes in the ability of nearby genes associated with obesity, type-2 diabetes and rare genetic disorders to regulate themselves. The big scary point here is that environmental stress in the womb is creating genetic changes that can be passed on to future generations.

As to what’s stressing out the babies-to-be, researchers have yet to rule out problems associated with infertility itself, but point to an exhaustive list of potential culprits associated with synthetic conception: hormone stimulation, egg retrieval, something called intra-cytoplasmic sperm injection, exposure to culture medium, micro-manipulation of gametes, among other things. Another unintended consequence of our growing reliance on artificial conception, researchers said, is that fewer men are being screened for infertility, which is often the first sign of more serious problems like testicular cancer.