There’s No Guarantee That Genetic Tests Are Accurate

Even those administered by doctors lack FDA oversight 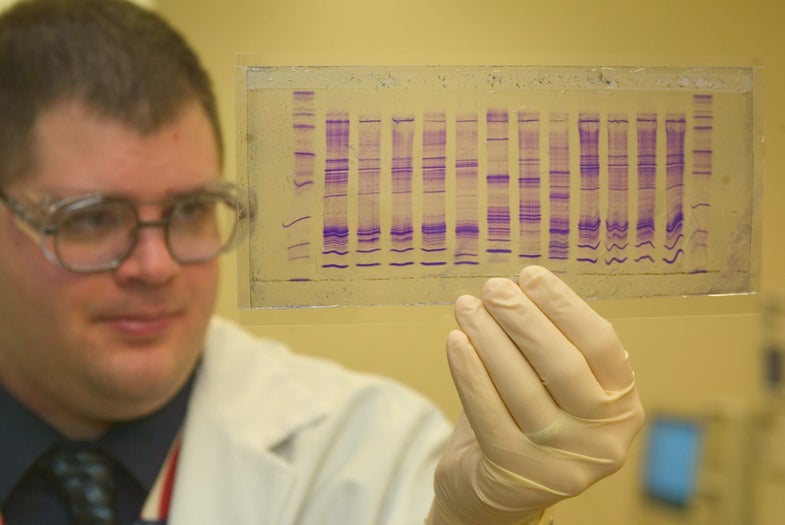 Doctors rely on genetic tests to help soon-to-be parents determine if their unborn child has Down Syndrome, or if a woman has a particularly high risk for developing breast cancer. But what if those tests got the answer wrong? That might be surprisingly common, according to a story published in the Boston Globe yesterday by the New England Center for Investigative Reporting (NECIR).

In the U.S., 13,000 lab-based genetic tests are currently available, and they’re given to millions of people per year. Yet there’s no guarantee that they work—the companies that make them don’t have to prove to the FDA that the tests are accurate, according to the NECIR investigation. Late last year, the FDA itself released a report about these tests.

Inaccurate results can cause improper diagnoses and unnecessary treatments for disease. One prenatal genetic test for Edwards syndrome, a condition in which an extra chromosome drastically delays a fetus’ development, was found to be accurate only 40 percent of the time, according to a 2014 study in the New England Journal of Medicine. For another test that uses a patient’s genetic information to determine if she is more likely to develop breast cancer, every false negative costs $775,278 “because the patient was probably given the wrong treatment,” according to a NECIR story from November. Parents who learn that their child might have Down Syndrome may choose to end the pregnancy.

As it stands now, the FDA has limited oversight over these tests; as a result of the report, the organization called for greater regulation of genetic tests, which the test manufacturers vehemently opposed, stating that more oversight would thwart innovation.

When patients receive these tests, they might not understand the likelihood of a false result. Most of these genetic tests are done under the advisory of a genetic counselor as well as a medical professional that helps families select the right tests and decide on what to do with the results. But according to the NECIR investigation, genetic counselors are likely pushing patients towards tests in which they have personal financial stakes: “There’s little question that genetic counselors are operating in a more free-wheeling environment than other healthcare professionals…Most medical companies must report how much they pay doctors for research, royalties, travel, and speaking fees, but the federal law doesn’t cover payments to genetic counselors. As a result, patients often have no easy way to know whether their counselor has a possible conflict of interest,” the piece reads. That’s important because it’s a genetic counselor’s job to explain the caveats and risks associated with each genetic test, which they might not be doing if they want more people to be taking the tests.

In some ways, these genetic tests aren’t too different from direct-to-consumer tests like 23andMe, which ran into trouble with the FDA in 2013 for marketing unjustified claims to consumers (the company is now approved to sell some types of genetic tests). The distinction, it seems, is the genetic counselor: The deficiencies of lab-based tests are (in theory) explained to consumers by genetic counselors, while direct-to-consumer tests have no such intermediary.

But if the genetic counselors aren’t being forthright with patients, as the NECIR piece claims, then patients are still being misled about their genetic information. To fix the problem, regulators must crack down on genetic counselors disclosing their financial relationships, or require stronger proof that the genetic tests themselves are accurate for patients to understand on their own.