The newly reported species might have used its giant carapace and fingerlike claws to scour the seafloor. 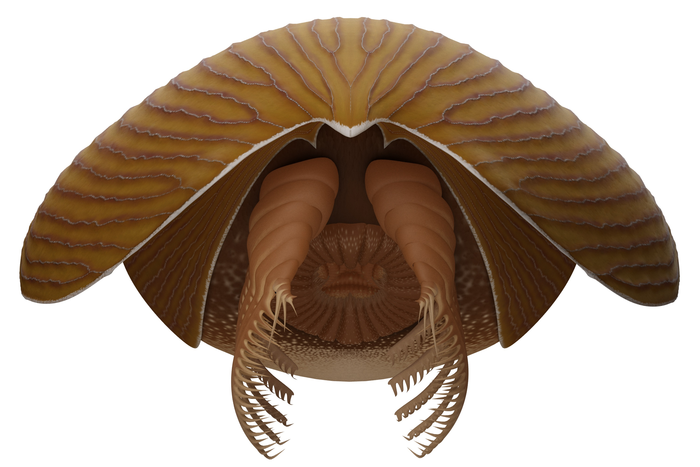 Titanokorys belonged to an extinct group of arthropods called radiodonts that appeared during the Cambrian explosion, an intense burst in animal diversity that occurred about 540 million years ago. Illustration by Lars Fields, © Royal Ontario Museum
SHARE

More than 500 million years ago, a giant invertebrate with a distinctly bizarre appearance scooted over the muddy seafloor of present-day British Columbia. It reached half a meter (around 1.6 feet) in length and boasted an enormous head covered by a helmet-like carapace, or shell, stalked eyes, and a pair of claws with rigid little structures that resembled fingers.

This arthropod, whose discovery was reported on September 8 in the journal Royal Society Open Science, probably spent its days scrabbling through the mud in search of prey. Scientists have named the creature Titanokorys gainesi, and say it offers a valuable glimpse at how some of the earliest animal ecosystems worked.

“Understanding how predators got established is important [in order] to understand how..other animals evolved, including many animals that we still know today,” says Jean-Bernard Caron, the curator of invertebrate paleontology at the Royal Ontario Museum in Toronto and coauthor of the study. “It tells us something about the complexity of the food web at the time, which we’d thought might have been a bit simpler.”

Titanokorys belonged to an extinct group of arthropods called radiodonts that appeared during the Cambrian explosion, an intense burst in animal diversity that occurred about 540 million years ago. Radiodonts had cone-shaped mouths lined with teeth, two frontal claws, and a series of gilled flaps along their bodies used for swimming.

Titanokorys belongs to a radiodont family known as hurdiids, which are noteworthy due to their oversized, three-part head carapaces. “What makes this particular group interesting for the context of the Cambrian is they were the top predators at the time, so they had an important role in controlling the prey populations of these earliest communities,” Caron says.

He and his colleagues came upon the remains of a dozen Titanokorys specimens in the Burgess Shale, a fossil site in the Canadian Rockies. These included fragments of carapace, mouthparts, and claws, as well as one remarkably well preserved carapace. To reconstruct what the rest of its body might have looked like, the team also drew upon fossils of Cambroraster falcatus—a smaller and more common hurdiid they previously discovered in the same area—that sometimes included bits of soft tissue.

Caron and his team found the carapaces of Titanokorys and its little cousin so odd looking that they nicknamed the fossils after spaceships, referring to them respectively as the mothership and the Millennium Falcon (a Star Wars reference that ultimately made it into the smaller hurdiid’s Latin name).

“The ‘mothership’ was something really strange,” Caron says. “There’s nothing like this today.”

Titanokorys is one of the bulkiest animals preserved from the Cambrian Period, a time when most creatures were only a few centimeters long. It also had a strikingly large, oblong carapace with the mouth and claws at the front and eyes at the very back. The eyes were positioned to look upwards, which suggests that Titanokorys probably couldn’t see what it was chowing down on but was able to keep a lookout for even larger predators. These might have included the meter-long Anomalocaris canadensis, the only Cambrian radiodont known to surpass Titanokorys in size.

Caron and his coauthor Joe Moysiuk, a PhD student in ecology and evolutionary biology at the University of Toronto, also compared the shape of Titanokorys’s carapace and claws with those of other hurdiids. This family had an impressively diverse selection of carapaces, Caron says, with shapes ranging from elongated to stout and from rounded to pointy.

However, the pair found, carapace shape alone didn’t seem to predict a hurdiid’s hunting style nor its ecological role.

Titanokorys had a fairly elongated carapace and claws well-suited for raking through the soft mud. “One would have assumed that [with] an elongate shape it’s more adroit,” Caron says. However, Titanokorys also had a short, stubby body that couldn’t efficiently slice through the water. It probably didn’t need to swim very fast, though. Rather, it may have used its large carapace to plow through the mud. Meanwhile, its spiny claws combed through the sediment and drew prey towards its mouth.

In other species, though, a long carapace was paired with claws that weren’t adapted to dig through the muck. Instead, these claws had longer “fingers” with thinner and more numerous spines that would have allowed the animal to filter tiny morsels from the surrounding water.

Titanokorys and its smaller neighbor Cambroraster had similarly-shaped claws, hinting that they might have gone after the same kinds of food on the seafloor. “Before we thought that each predator had their own groups of prey that they would have been eating,” Caron says. “But it seems that competition was a big deal in the Cambrian, and maybe even among predators.”

Still, he says, more evidence is needed to confirm whether these two species were competing for dinner.

“We’re still missing quite a bit of information,” Caron says. “But I’m hoping with more research in this field we’ll discover other members of this group of radiodonts, which might help us to better understand this issue of shape of carapace versus types of claws.”