How A Robotic Octopus Could Help Us Control Autonomous Drone Swarms 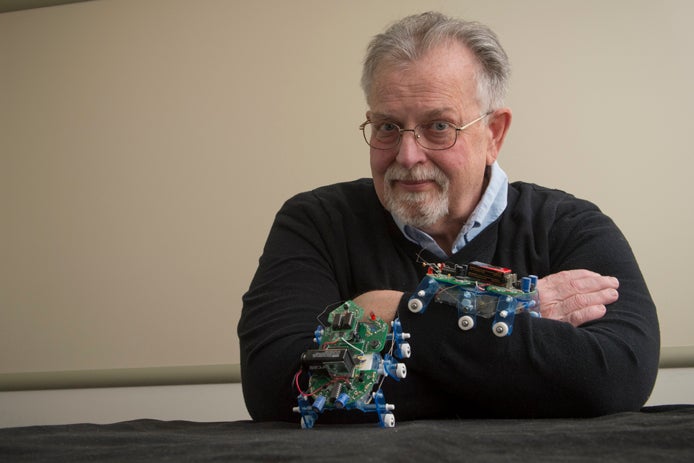 Evolution goes like this: cockroach, octopus, robot swarm. At least, that’s the rough impression I got after talking to James Crowder, a Raytheon engineer who’s working on solving the problems of artificial intelligence.

Crowder’s focus is on systems that reason and learn on their own. For a decade, this meant building a robotic cockroach that’s afraid of light. Now, it means an octopus-inspired robot with a central brain that filters responses from smaller sub-brains. In the future, lessons from this octo-bot could power autonomous swarms of drones.

“My thought is that if I can’t build self-evolving lifeforms at the cockroach level, I’ll never build C-3PO,” Crowder told Popular Science. “Can I build something that will self-adapt at a lower brain level, because if I can’t do it at that level, I’ll never do it at an adult human level.”

His robo-roach is a success: it can detect light, and moves away from the light either by turning or, if it can’t turn, by backing up.

So why the leap from roach to octopus?

“A biologist suggested I try a distributed brain model like an octopus,” Crowder said, “because an octopus has like mini-brains in each leg and then a central mediator that mediates how they interact with each other and how they work. The mediator carries the objectives and goals but each of the other distributed neuro pieces does what it needs to to accomplish those.”

This is cool science, but Raytheon isn’t into research just because it’s interesting. Going from a roach to an octopus (or, currently, a two-limbed robotic dipus) will teach the defense giant how to make better, smarter drones.

“Right now it takes multiple people to run one UAV,” said Crowder. “We’d like to get to where one person can run multiple UAVs, but that requires them to have some degree of autonomy.”

So if drone swarms are going to be a thing, with humans controlling multiple robots all at once, then robots are going to have to handle the basic tasks themselves. And to do that, they’re going to need to learn from a robotic octopus.