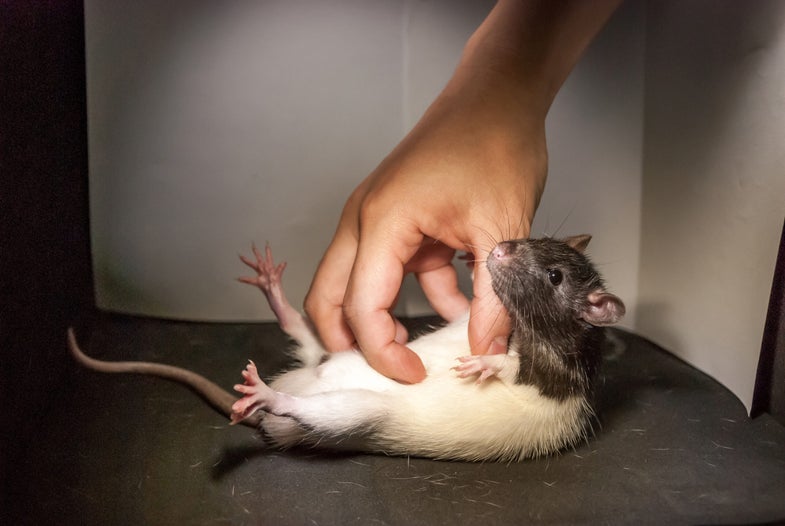 Has someone ever tried to tickle you when you just weren’t interested? Sure, you might laugh involuntarily, (it is tickling, after all) but it’s not nearly as much fun as being tickled when you’re in a safe, comfortable frame of mind. That’s just being a human. It’s also being a rat.

A new study published Thursday in Science finds that just like humans, lab rats prefer to be tickled when they are in a good mood.

Researchers have known that rats are ticklish since 1999, when neuroscientist Jaak Panskepp showed that tickled rats emitted high pitched squeaks usually associated with positive activities like play or food. These squeaks are known as ultrasonic vocalizations, and resemble laughter, though at a pitch too high for humans to hear.

In this new study researchers showed that rats reacted more positively (with more ultrasonic vocalizations) to tickling when they were in less anxious situations. They also showed that the rats’ reaction to tickling was closely related to activity in an area of the rat’s brain called the somatosensory cortex, where the sense of touch is processed. The study also found that the rat’s belly was more ticklish than either the back or the tail, which was not ticklish at all.

To test the ticklishness of rats in different emotional states, lead author of the study Shimpei Ishiyama and colleagues tickled the rats in different situations. For the comfortable situation, the team tickled the nocturnal rodents in dark boxes, where they giggled their high-pitched rat giggles, chased the tickling hand, and leapt up the sides of the box in a display of joy (a display imaginatively named Freudensprünge or joy jumps).

“We also tickled them in an anxious situation” Ishiyama says, under bright lights and on a raised platform. In those situations, Ishiyama says “They do not vocalize as much as when they are tickled in a dark box.”

The researchers measured the happiness of the rats with a tiny sensor in the somatosensory cortex which allowed them to see that when a rat was being tickled it was not only laughing, but that area of the brain was very active. Later, when researchers stimulated that area of the brain with a small electrical current, the rats laughed as though they were actually being tickled.

Studies looking at the ticklishness of rats could help give researcher a deeper look into the origins of play and laughter in other species, including our own.

“This is the only deep scientific approach we currently have to understanding the evolutionary sources of our own emotions, which are very important for deepening psychiatric understanding and treatment of affective disorders. ” Panskepp, who was not involved in the new study, says.

Ishiyama also looks at studies like this as a step towards understanding happiness, an emotion that many people strive for, but can sometimes seem elusive.

“Science has been obsessed with bad things” Ishiyama says. “It’s important to also study positive motivations like happiness or fun.” He hopes to continue studying other mysterious aspects of ticklishness, including trying to figure out why people can’t tickle ourselves.