Q&A With An Insane Instrument Inventor

Andy Cavatorta is a surreal Stradivari 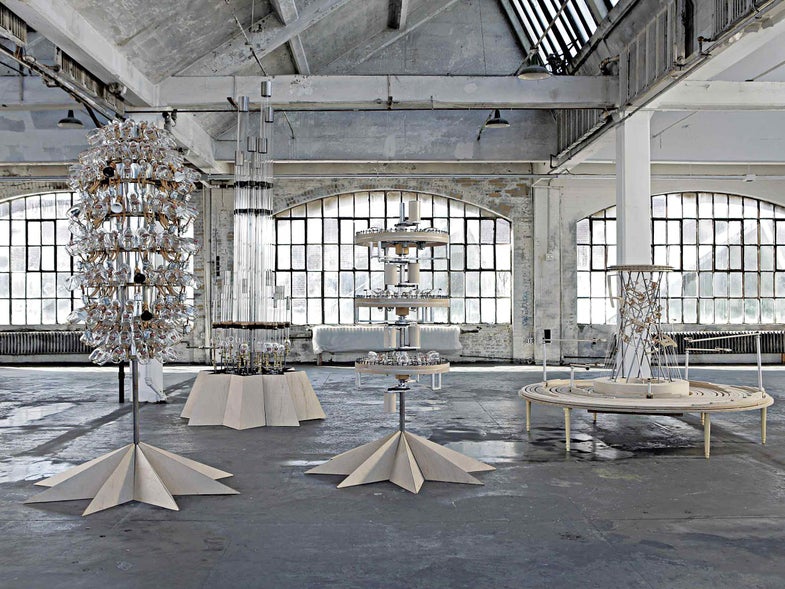 In 2010, Andy Cavatorta was a master’s student at the MIT Media Lab when Björk visited. The Icelandic musician was seeking a collaborator to make music using the forces by of nature. Cavatorta was eager to help: For years, the software engineer spent his evenings tinkering with noisemaking robotic sculptures. Together, he and Björk dreamed up “gravity harps,” enormous pendulums 20 feet high that played notes by swinging columns of strings past stationary picks. Björk used them on her 2011 album Biophilia and for a subsequent tour.

More commissions followed, allowing Cavatorta to charge as much as $250,000 per project. Stella Artois hired him to build an entire orchestra incorporating its signature chalice, and most recently, the Danish ensemble Between Music commissioned instruments for AquaSonic, a concert performed entirely underwater.

I build cheap, shabby prototypes, because I’d rather find out something is a bad idea for $5 worth of cardboard than later, when it’s made of steel. In the process, I find ways to make it sound and look beautiful.

How did you make underwater instruments?

The acoustics are completely different—all the things that work in the air just don’t underwater. One of the instruments works like Benjamin Franklin’s glass armonica, but the water vibrates the bells, playing multiple notes at the same time. The other is similar to a hurdy-gurdy and has this otherworldly electric-guitar wail.

What is the purpose of your inventions?

I always want people to be moved—it can’t be a cute gimmick. You know, there was a time that the pipe organ was a crazy, experimental, flamboyant piece of technology, and I like to think what I make is in the same vein.

This article was originally published in the July/August 2016 issue of Popular Science, under the title “A Surreal Stradivari.”