Graphene Could Give Us Sleek Night Vision Sensors

As goggles, and maybe even smartphone cameras or windshields 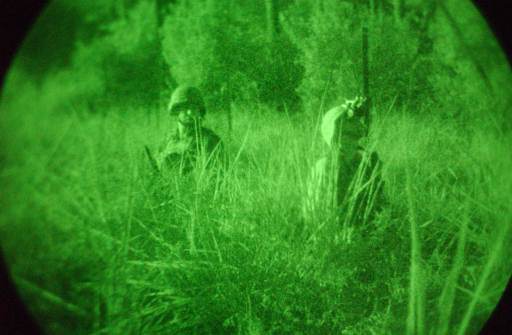 Soldiers seen at night, photographed with an image intensifier

Because of its unique chemical and physical properties, graphene has helped scientists design new gadgets from tiny computer chips to salt water filters. Now a team of researchers from MIT has found a new use for the 2D wonder material: in infrared sensors that could replace bulky night-vision goggles, or even add night vision capabilities to high-tech windshields or smartphone cameras. The study was published last week in Nano Letters.

Night vision technology picks up on infrared wavelengths, energy usually emitted in the form of heat that humans can’t see with the naked eye. Researchers have known for years that because of how it conducts electricity, graphene is an excellent infrared detector, and they wanted to see if they could create something less bulky than current night-vision goggles. These goggles rely on cryogenic cooling to reduce the amount of excess heat that might muddle the image. To create the sensor, the researchers integrated graphene with tiny silicon-based devices called MEMS. Then, they suspended this chip over an air pocket so that it picks up on incoming heat and eliminates the need for the cooling mechanisms found in other infrared-sensing devices. That signal is then transmitted to another part of the device that creates a visible image. When the researchers tested their sensor, they found that it clearly and successfully picked up the image of a human hand.

The sensor, left; the image it creates of a human hand, right.

While it’s easy to imagine that this technology could help make cheaper, sleeker, and more flexible night vision goggles, it could also be used to make infrared screens. “In the future, we can have infrared detectors integrated in every cellphone and every laptop. That means that in the future, you can control them just by waving your hand in front of them,” one of the study authors told Live Science. The windshield might be especially useful, since nearly half of all car accidents happen at night. Presumably, the ability to see better at night would reduce some of the risk.

Before this technology can hit the market, the researchers will work to make the images come through with higher resolution. But there might be a bigger issue with graphene—despite its many commercial applications (and the promise of its use in other infrared detectors) the material hasn’t yet made it to the market. Although it hasn’t happened yet, it may still do so in the future, and maybe these infrared sensors will be the first to incorporate graphene commercially.