This New App Sends Notes From Beyond the Grave Screenshot of the app SafeBeyond. Safe Beyond screenshot
SHARE

When Moran Zur got married in 2006, his joy was tempered with sadness. He’d lost his father to cancer in 2002, and on that otherwise joyful day, he felt the loss deeply. He thought to himself, “What if I could only ask him so many questions that we never had the chance to talk about?” He dreamed of creating a system that would allow someone to communicate with his or her loved ones after death.

In 2012, Zur’s wife was diagnosed with stage IV brain cancer. At the time of the diagnosis, their son was only three years old, and Zur was afraid he would never know how wonderful his mother was. “I was very occupied with the thought he might lose his mum and will never get a chance to know her, and she’s an amazing person. I was really afraid that if I don’t do something to change it, he’ll never have a chance to know her.”

Technology had advanced since he had the initial vision, and Zur realized he had a real opportunity to make a difference. So he left his job as a CEO in the financial industry to create SafeBeyond, a technology-enabled messaging service that allows a person to leave a virtual legacy after they’ve passed.

The free service (users can upgrade for access to additional storage) allows people to send video, messages, documents and other data through an app or website. It recently launched, drawing 5,000 users in its first month. “This is a great part of what we can leave as a part of our legacy and to have kids and generations to come to know them better,” says Zur. “We call it emotional life insurance.” 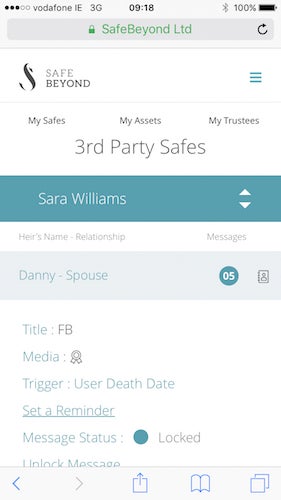 Screenshot of one of the menus on the new app Safe Beyond, which lets users program texts and other information to be sent after death.

It works like this: Users sign up for the free service online or through an app (available on Android and, soon, iOS) and they can send up to 1GB. (An upgrade gets you 30GB for $8/month). Then, you can appoint trustees and heirs. The trustees will be in charge of carrying out your digital will, and the heirs will be the recipients of the digital time capsules.

Users can program any number of messages into the system: a note to your granddaughter on her 21st birthday (a “date message”); a heartfelt message to your son on his wedding day (an “event message;” if you don’t know the date a trustee can add it); a message that pops up if your wife goes to “your” place, whether it was Madison Square Garden or your favorite restaurant (a “location message”), or simply a video of your wife and kids playing together. The system also allows a person to hand over to an heir instructions and credentials to social media accounts, so their own digital wishes are carried out with each account.

“We can’t imagine a world without a presence,” says Zur. “It’s something that’s impossible for human beings to do. But you can definitely anticipate there are going to be some events in the future that take place and they’ll be very important for your loved ones. And then, at the right moment, you’ll be able to appear there and to be taking part of your loved ones’ lives and help them cope better with the fact that you’re gone.” The information is stored in the Amazon Cloud, and Zur says he’s put an array of “bank level” security systems in place to protect the data. In addition, he says two people—they can be heirs or trustees—must verify a death before the account sends out messages, as planned.

“We believe that each person is more than the total sum of his assets and there’s much more that you can leave for your loved ones,” he says.

As for the digital future of SafeBeyond, Zur says it’s a service that he hopes will outlive him. And, of course, there’s already a contingency plan in place.

You can catch the full audio conversation with Zur on Linendoll’s podcast, at http://www.Katie.show//