The throwable bot is about 8 inches long and is intended to help militaries with surveillance. 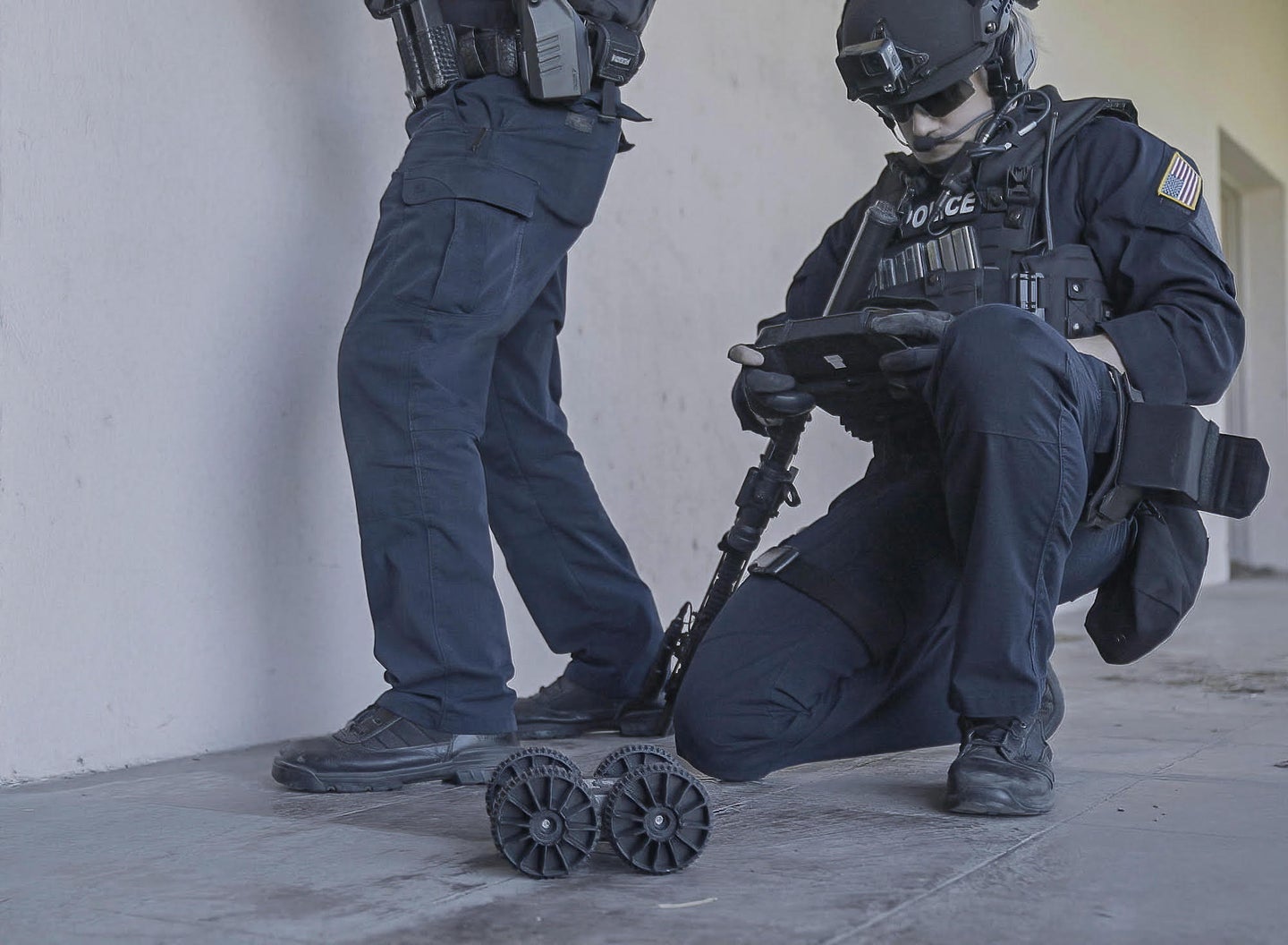 With an overhand throw like he’s lofting a grenade, a soldier hurls a robot. It lands, all four oversized wheels absorbing the shock, and immediately the little machine is rolling around, ready to scout underneath cars and around corners before the soldiers get there. This is the SIGYN Mk1 Recon System, a throwable robot marketed at militaries and police forces and announced earlier this month.

The complete package, at least as promised, is a tool for better clearing rooms and approaching otherwise dangerous situations. A throwable robot can put a camera on people just out of reach, or whom it would be dangerous to observe up close. For soldiers clearing rooms in a building, or police attempting to do the same, being able to explore with a robot first can offer information and advantage without risking the lives of anyone in uniform.

Throwable robots are niche machines with niche applications, promising a feature no other tool can deliver the same way. In a demonstration video produced by Sky-Hero, the Belgium-based company that makes the SIGYN throwable robot, the vehicle can be released from a backpack, remotely controlled under a car, tossed like a grenade, tumble down stairs, drive over netting, and even continue to operate after being driven directly over by a car.

The robot’s four wheels are just under 4 inches in diameter, and the whole machine is just 7 inches wide and almost 8 inches long. That’s a compact body, and the compactness is the point. This is a machine that can be carried and can navigate through and under various obstacles, like gates or barricades, and it can be thrown through windows or around corners. Each face of the robot has a small camera gently angled upwards, and sensors in the bot allow it to automatically select the camera on the side the robot is driving. The cameras can see in daylight or darkness, and the robot has LED lights to better illuminate objects in its field of vision if necessary.

[Related: A New Generation of Throwbots is Ready to Be Flung Into Battle]

Once on the ground, the SIGYN can drive at 3.8 mph for up to 2 hours. If not cruising around, that endurance expands to 5 hours as a remote sentry. The maximum weight of the SIGYN, battery included, is 4.4 pounds, making it about four times as heavy as a grenade. That extra weight isn’t a problem, because the SIGYN just needs to be thrown far enough to clear an obstacle, not so far that it keeps the thrower safe from being caught in an explosion. To stay in touch with its operator, the SIGYN uses its own encrypted signal, and can operate without GPS, cell service, or wifi signals.

Aardvark Tactical is the North American distributor for the SIGYN, and accessories for the robot are made by Project7 Armor. Borrowing language that would be perfectly in place in a Silicon Valley pitch deck, Aardvark Tactical’s announcement described the robot as part of “an easy-to-use, intelligent recon ecosystem that revolutionizes mission safety.” Also in that system is the Loki quadcopter and a handheld controller. The controller can manage and share information from up to four robots at a time, including a mix of quadcopters and ground machines. With four robots in action at once, Aardvark says, team members hooked up to the same control station can “choose between and watch any of the four device feeds from the new Tactical Wrist Viewer, regardless of which device is currently being controlled.”

While the SIGYN is a new throwable robot, the category saw a bit of a boom in the early 2010s. Robots like iRobot’s FirstLook and Recon Robotics’ Scout were sold as tools for forces fighting in Afghanistan, where the fact that they could be thrown would give soldiers and Marines a better angle in buildings during patrols. These robots, much like the SIGYN, were marketed to police and militaries alike, as the specific obligations of urban conflict can warrant a gameras-first approach to identifying people before going in shooting.

The category even features the spherical Explorer, probably the most grenade-like of the thrown robots. Essentially a ball of cameras that could transmit video, the Explorer was a tool for placing eyes inside one room, without the option to drive into another if the first room was empty.

While that earlier generation of throwbots sometimes won lucrative contracts, both the technology and the market for thrown cameras on wheels has likely improved since the mid-2010s. If enough police forces and military customers can see utility in sending a camera to scout before bringing in people, the SIGYN throwable robot might become a recurring tool in the arsenal of urban warfare.

This post has been updated to clarify the description of the company that makes the robot.