Police and Firefighters in the U.S. Get a Tiny, Throwable Recon Robot

U.S. military forces in Iraq and Afghanistan have been making use of a tiny, tossable robot for recon and observation... 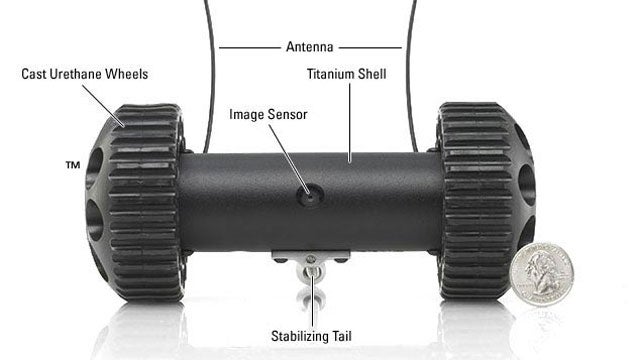 U.S. military forces in Iraq and Afghanistan have been making use of a tiny, tossable robot for recon and observation for several years, and now–thanks to a decision handed down by the FCC–law enforcement and firefighters can deploy the hardy little ‘bot, known as the Recon Scout Throwbot.

You read that correctly: a potentially life-saving tool that’s earned broad approval by service members serving in some of the toughest regions in the world was previously denied to first responders and law enforcement stateside because the robot couldn’t get a waiver to operate in a certain block of spectrum needed to transmit its live video feed. We’ll save you the rant about a bloated and slow-moving bureaucracy. Suffice it to say, Throwbot now has its waiver and is ready to recon.

And recon it can. At just 1.2 pounds and eight inches long, the camera-equipped rolling robot can be quite literally tossed like a football onto rooftops or through building windows. Its design ensures it lands upright in pretty much any situation where it hits a flat surface, and once deployed it can stealthily move under furniture, cars, or other cover and beam back live video to a command station 1,000 feet away. It is designed to be controlled by an operator working alongside it via a simple joystick control that also sports a small display that provides a ‘bots’-eye view.

Such a small, durable, and easily deployable robot with video streaming capability has so many potential (and critical) uses that it’s mind-numbing to think that it took this long for something like broadcast spectrum to get approved. See Throwbot get thrown in the video below.