And it's probably humanity's fault 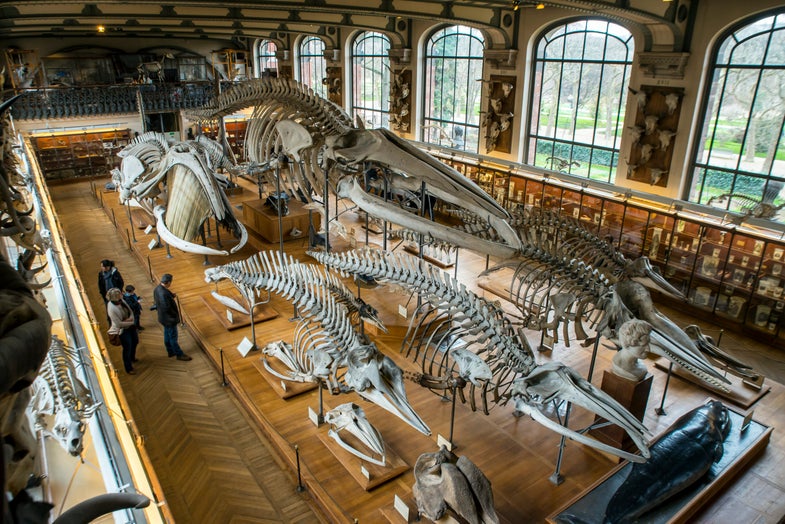 Part of la Galerie d'Anatomie comparée (the gallery of comparative anatomy) at the Museum of Natural History in Paris, featuring the skeletons of numerous whales. Herman Pijpers
SHARE

Everyone enjoys a good fish tale, bragging about the (usually entirely fictional) size of their catch. But bigger fish, whales and other large ocean mammals may be more likely to go extinct thanks to our predilection towards the next big catch.

In a paper published today in Science, researchers found that being big does not give an animal a better chance of survival in the modern ocean. Humans like catching or hunting the largest animals, harvesting them for food, resources, and trophies, putting populations under stress and upping their extinction risk.

“What our analysis shows is that for every factor of 10 increase in body mass, the odds of being threatened by extinction go up by a factor of 13 or so,” paleobiologist Jonathan Payne, lead author of the paper said. “The bigger you are, the more likely you are to be facing extinction.”

Payne and others analyzed 2,497 species of vertebrates and mollusks, both thriving and extinct over the past 445 million years. They focused on the last 66 million years, in particular–after the extinction of the dinosaurs, and compared past extinctions with extinctions happening today. They found that size was not a factor in past extinctions, and that previous extinctions related more closely to where animals in the ocean lived (near the coast, in deep waters, etc) than to how large they grew in those environments.

Species loss is accelerating both on land and sea, and a report issued last year found that the populations of the world’s oceans have been cut in half in the past 45 years. Population shrinkage isn’t the same as extinction, but with more and more animals disappearing from the oceans, it’s only a matter of time before more species start disappearing too, especially when faced with other threats like warming waters and ocean acidification.

But that doesn’t mean that things are hopeless.

“We can’t do much to quickly reverse the trends of ocean warming or ocean acidification, which are both real threats that must be addressed. But we can change treaties related to how we hunt and fish. Fish populations also have the potential to recover much more quickly than climate or ocean chemistry,” Payne said. “We can turn this situation around relatively quickly with appropriate management decisions at the national and international level.”