By destroying this female pharaoh’s legacy, her successor preserved it forever

How the modern world came to understand Hatshepsut’s might. 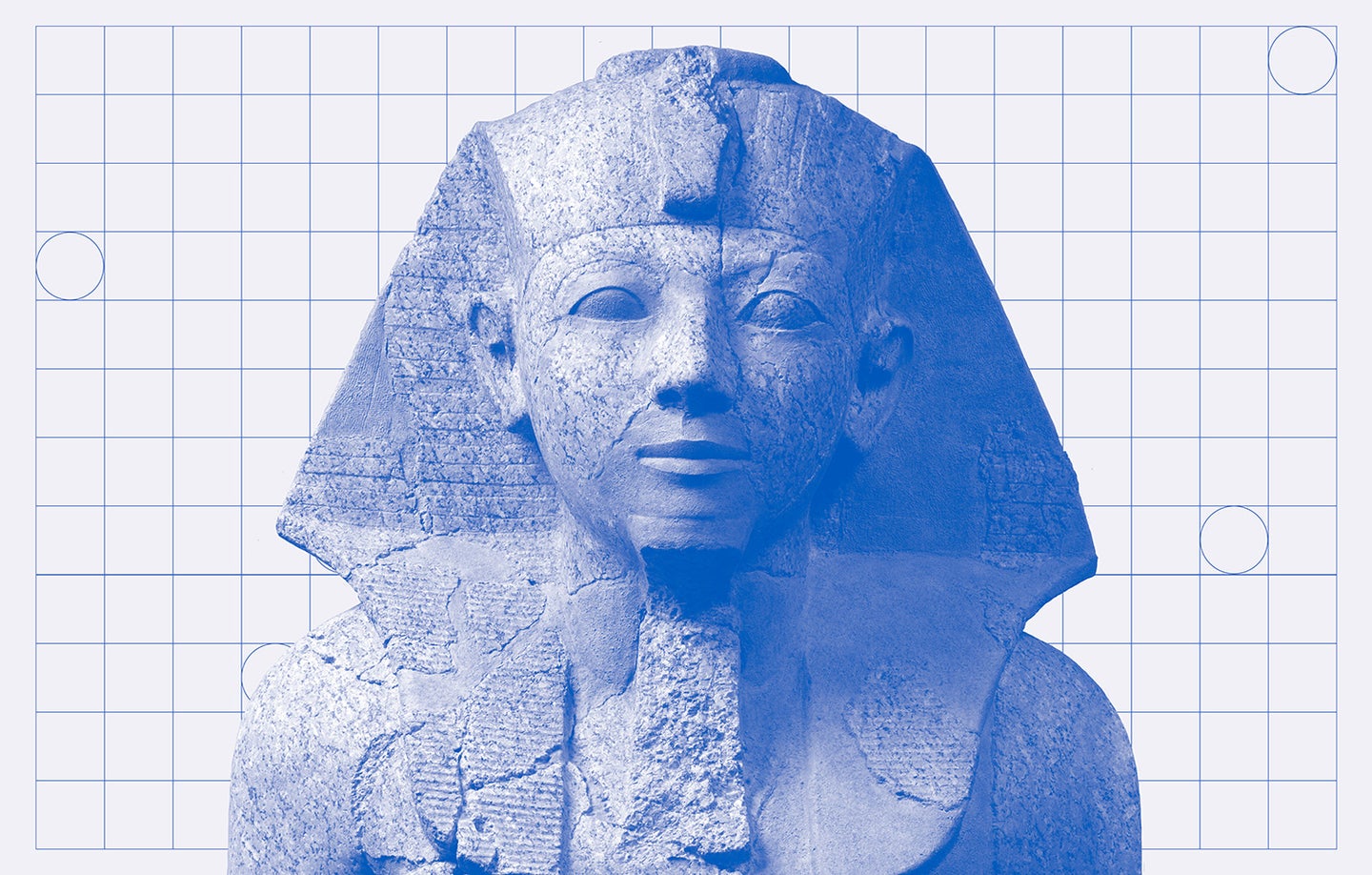 This photo illustration is based on a large kneeling statue of Hatshepsut. The Met; Illustration by Katie Belloff
SHARE

Popular Science’s series, The Builders, takes you behind the construction tape to reveal the individuals behind and legacies of history’s greatest architectural works.

On a midwinter trek to Manhattan’s Upper East Side, I went in search of room 115 at the Metropolitan Museum of Art, a North American home of the Egyptian pharaoh Hatshepsut. I walked past the outcropping two or three times, before I finally found her—dozens of her, really—in a well-lit antechamber. From one statue, Hatshepsut’s limestone eyes smiled, catlike, through 3,400 years of history. From another, a jet black statue of the seated pharaoh, carved from the raven rock diorite, commanded attention even without a face.

But perhaps the most intriguing artifacts were those that envisaged the pharaoh that tried to usurp her, her nephew Thutmose III. On inspection, his form is different from his aunt’s: His face is flatter, broader, more masculine. But the distinctions are so minimal they’re almost nonexistent to an untrained eye. Looking into his mask, I ruefully remembered something Kara Cooney, a UCLA Egyptologist who has studied the intersection of gender and rule, had told me: “Her style was so pervasive, it just permeated everything.” Hatshepsut built Thutmose’s public appearance when he was just a boy. He may have grown up, consolidated power and systematically erased her, but he couldn’t wash away his own face, and by that time, it was already an avatar of Hatshepsut’s own.

Taken together, Hatshepsut’s many statues, temples, and burial grounds reveal a story of a rise to unprecedented power, and the physical propaganda she used to achieve such great heights. These strategies for visually cueing her stature are still in use today.

Like the Nile river on which the royal family’s rule depended, the course of Hatshepsut’s life was charted long before her birth around 1500 BCE. As the eldest daughter of King Thutmose I, she would train for the coveted position of “God’s Wife of Amen,” the personal priestess of Egypt’s primary god. When her brother Thutmose II assumed the throne, she would marry him and fulfill her greatest duty: producing the next pharaoh.

But something disturbed this plan. In broad hieroglyphics, Hatshepsut’s husband died young, throwing Thebes into chaos. He left behind an heir born to a palace concubine. Just a baby, Thutmose III needed a regent to rule in his stead. Hatshepsut stepped into this opportune crevasse, the expiration date on her power marked by the boy’s eventual maturation into a king. But after years of co-rule with her nephew, she achieved something no woman had before. Hatshepsut became pharaoh while another king already had the job.

Through the haze of history, we can just make out the factors that contributed to her rise. She had an unimpeachable pedigree and an essential position in the religious pantheon. But perhaps the most important ingredient in Hatshepsut’s successful grab for power were the things she built.

Hatshepsut learned how to wield the ideological weapon of design from her father. Thutmose I was a successful king, buoyed by the wealth his soldiers stole from Nubia, modern-day Sudan. “The money he brought back from those wars allowed him to build temples, as hundreds of kings had done before him,” Cooney writes in her book The Woman Who Would Be King: Hatshepsut’s Rise to Power in Ancient Egypt, “but Thutmose I crafted his architecture in stone, not just mud brick.” As a young girl, Hatshepsut would have “understood how building programs functioned simultaneously as jobs programs, propaganda machines, and gifts to the gods.”

Starting as regent and continuing into her 20-year-long solo reign, she raised funds to restore temples across the empire, confirming her proximity to the gods and forging alliances with powerful priests. She erected the first obelisks in centuries, reviving a form that remains popular—consider, for example, the Washington Monument in Washington D.C. In Hatshepsut’s era, some spires sat in the centers of her own cities, while workers erected others in the heart of Nubia, a conquered land from which Egypt pulled slaves and precious minerals such as gold. Each was a 90-foot-tall statement: Remember who rules you.

Hatshepsut also covered the country with her face. At first, she shared paintings and carvings with her nephew. Her decision to depict the two of them, side by side as co-rulers, was already radical. But eventually she cut out the boy king altogether. Her stone-cold likenesses, of which there were thousands, became “ciphers for quick identification,” Cooney says. Like more contemporary propaganda posters “these are things that the ruled understand immediately.”

The sculptures served as more than simple monuments. The fact that she could afford to commission statuary, especially on such a monumental scale, reflected her immense wealth. It also showed her access to the gods; Egyptians saw statues as links between mortals and deities. Hatshepsut’s decision to wear the traditional masculine pharaoh’s garb placed her in an unbroken chain of inherited, God-given power, while the cat-like eyes distinguished her from her ancestors. And hieroglyphics declaring her role as wife of Amen—which Westerners were able to decode after the transliteration of the Rosetta Stone in 1822—further reified her status.

As Hatshepsut consolidated her power, she began to display herself alone more frequently—a king in her own right (the ancient Egyptian language had no word for queen). The most famous figure, carved of limestone, shows her crowned in a nemes, a head cloth that encloses the leader’s face like rippling parentheses. A shendyt, a kilt typically worn topless, covers her lap. In other depictions, she wore the pharaoh’s long, false beard.

Despite these symbols, Hatshepsut’s artists frequently highlighted their king’s gender. Her waist is narrow. Some sculptures carry faded yellow pigment, the female hue in Egyptian art. Curators at the Metropolitan Museum of Art draw attention to subtle details in placards alongside her relics; they note her “long dancer’s legs,” and the “decidedly feline quality” of her face.

Hatshepsut’s most ambitious architectural project was her own mortuary temple. (At the time of her rule, the Great Pyramids of Giza, burial sites for the rulers of Eygpt’s third dynasty, were already 1,000 years old, and the tomb of the boy King Tut lay 150 years in the future.) For the location, she chose Deir el-Bahri. In the mountains across from the modern-day city of Luxor, this was also the site of King Mentuhotep II’s funerary temple, built over 500 years before. Here her temple became the centerpiece of the ancient, expansive complex in the Valley of the Kings. “Her constructions, still to this day, are what catch your eye first,” Cooney says.

Stark in its symmetry, the stone temple has three floors of colonnaded terraces, carved directly into the ruddy earth walls of the valley. But Hatshepsut didn’t choose just any crook: Her eternal resting place is at the seat of a sacred hill dedicated to the goddess Hathor. The entire structure is oriented to harness the sunrise of the winter solstice. On appointed days, the rays shine through a light box, illuminating the structure’s deepest chambers—and images of the gods hidden inside.

By building into Hathor’s hill, Hatshepsut permanently linked her worldly reign to the higher realm of the gods. She also assured against her own erasure, as no one could destroy the temple without also defiling the goddess. “What we have preserved is perfectionism,” Cooney says. But that veneer was cracking fast.

Hatshepsut seems to have passed this knowledge about the link between authority and architecture on to her nephew Thutmose III. After he came to power, the young man wasn’t interested in building new structures. He wanted to sack the old ones.

Roughly 25 years after Hatshepsut’s death at around age 49, Thutmose III systematically destroyed his aunt’s legacy, burying all evidence of her in the Egyptian sand. He stripped her name and associated phrases like “Wife of Amen” from obelisks, statues, and even the interiors of Deir el-Bahri. Workers plastered over every reference to Hatshepsut they could find, sloppily rededicating monuments to the men of the 18th dynasty. They broke feminine representations of Hatshepsut apart and threw them, by the hundreds, in what experts now call “the Hatshepsut Hole,” a trash heap outside her temple.

But in trying to bury Hatshepsut’s legacy, Thutmose III ended up preserving it forever. “It’s the successful kings who build,” Cooney says, and it’s the successful kings who destroy. Thutmose didn’t have the might to erase the influence—or images—of his predecessor. “[E]ven with the cracks and missing pieces,” Catharine Roehrig, an Egyptologist at The Met, wrote in an email, “the statues as reconstructed are in better condition than others that stood out in the yearly sand storms and were attacked later in Egyptian history.”

It is in the the Met that Hatshepsut’s success is on full display. While historians don’t think she knew Thutmose III would try to scrub her story from the earth—such retributive behavior is unusual in the little we know about Egyptian history—she successfully guarded against obliteration nonetheless. The art she commissioned and buildings she raised told a story 3,400 years ago. Through her uncanny acts of self-preservation, they continue telling it to this day.