400-Year-Old Hearts Had Same Diseases As Hearts Of Today 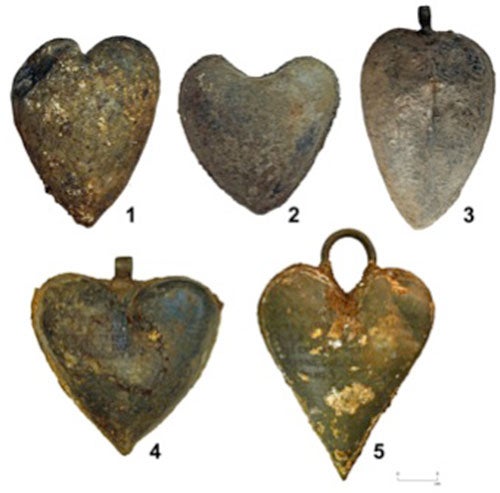 Health concerns for people in late 16th century France were a bit different than today. Most people lived in squalid conditions in which infectious diseases ran rampant; life was pretty difficult and short (by the mid-1700s, the average person could expect to live to about 30). But many who were spared consumption or the plague couldn’t avoid a health condition that is one of the most common today: heart disease. Archaeologists in France uncovered five embalmed hearts dating back to the late 1500s and early 1600s, several of which showed signs of disease, according to a presentation given yesterday at the meeting of the Radiological Society of North America in Chicago.

The researchers found the hearts, which likely belonged to wealthy noblemen, when they were excavating the ruins of the Convent of the Jacobins in Rennes, France. Since the excavation began in 2011, they have found some 800 graves, along with these five embalmed hearts, each encased in heart-shaped urns made of lead. Slowly and carefully, a team of experts in many different disciplines removed the hearts from their urns and unwrapped the embalming material. They took MRI and CT images of the hearts, identifying the valves and chambers in four of them (one was too poorly preserved to show much). Once the researchers rehydrated the tissue, they took more scans and dissected the hearts to look closely at the muscle and tissue.

One of the hearts showed no signs of disease, but three of them had a buildup of plaque around the arteries, a condition called atherosclerosis. Scientists still aren’t sure what causes the disease, but they know that smoking and high blood pressure can exacerbate it and that, as the disease progresses, it can cause heart attack and stroke. “Atherosclerosis is not only a recent pathology, because it was found in different hearts studied,” study author Fatima-Zohra Mokrane told Reuters.

Without the rest of the body, the researchers don’t know exactly what caused the deaths of the former owners of these hearts. But finding old, well-preserved specimens like these could help researchers better understand the causes and progression of the disease. Another specimen from the same dig, a corpse that was perfectly preserved inside a lead casket, might have pathogenic bacteria preserved in it, which would allow researchers to see which communicable diseases were prominent at the time.