All Wing, No Noise 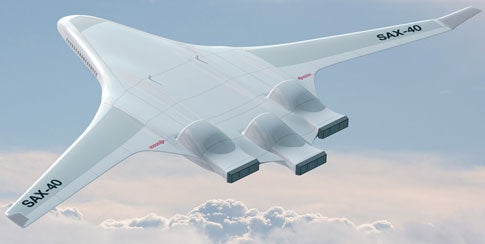 All Wing, No Noise

How would you design an aircraft if your main aim were to keep its roar from waking up the entire neighborhood during takeoffs and landings? A group of 40 engineers from the Massachusetts Institute of Technology and England´s University of Cambridge took on that challenge and, three years later, has unveiled designs for the SAX-40. Thanks to a host of noise-silencing innovations, the 215-seat airplane should be virtually inaudible outside the airport. Designers estimate that the aircraft will emit just 63 decibels at takeoff, about as loud as an average conversation. (Today´s airliners hit up to150 decibels.)

To achieve such relative silence, researchers needed to rethink nearly every aspect of the typical airliner. â€There´s no one thing you can do,â€ says Will Graham, who headed up the Cambridge airframe-design team. â€You have to treat all the noise sources.â€

Chief among them is the airframe. The faster a plane flies, the louder it roars. So Graham and his group designed the SAX-40 with a blended-wing body, a concept that jettisons the tube-and-wing approach for a tailless, triangular structure. That shape provides extra lift, enabling the plane to fly more slowly during takeoff and landings. It also saves a significant amount of fuel, getting some 35 percent more passenger-miles per gallon than a Boeing 777.

A number of other researchers, including at Boeing, are working on similar concepts. But challenges remain. An aircraft without a stabilizing tail would be far more difficult to fly. And then there´s the question of how to make its flattened fuselage as structurally strong as a cylinder. But perhaps the biggest hurdle is the airline industry´s financial investment in conservative design. Betting on such a radical plane, Graham says, â€would be a huge step for manufacturers.â€

WHAT MAKES THE SAX-40 SO QUIET?

The long exhaust ducts have acoustic liners to dampen noise, and the size of the exhaust nozzles can be made smaller during takeoff to reduce noise or larger while cruising for fuel efficiency.

Instead of noisy flaps, a sloped wing and steep landing angle do the braking. In lieu of a tail are winglet rudders. Engines embedded in the frame, with air intakes on top, reduce drag and noise.

Landing gear is the major source of noise during takeoff and touchdown. An aerodynamic fairing around the SAX-40´s wheels diverts airflow and reduces drag.