The Quiet Demise of the Cuties and the Yo-Yos

Two Vietnam-era planes provided an effective proof-of-concept for the notion of stealth reconnaissance. Then they disappeared.

If Washington ran procurement programs the way it did the Lockheed YO-3A project, the words “billions” and “dollars” would never again have to be used by the Department of Defense in the same sentence.

But then I’ll bet you’ve never heard of the YO-3A.

There’s an irony in that, I suppose, given that the so-called Yo-Yos and their immediate predecessors, the QT-2s, were the original stealth airplanes–ultraquiet, night-flying reconnaissance planes that served for a total of two covert years over Vietnam and Cambodia. “We never had an airplane come back from a mission without having [visual] contact with the enemy,” says Les Horn, then a young Navy officer who played a huge role in the development of what ultimately became an Army project. Their silent-stealth approach was an absolute success. “I don’t know of anybody who took a round,” adds George Walker, a YO-3A pilot who retired in 2000 as a brigadier general with 1,400 combat hours, 400 of them in Yo-Yos.

I met Horn, Walker and a number of other Night Stalkers, as they called themselves, last May at the first-ever big reunion of quiet-stealth people, in a hangar on Meacham Field, in Fort Worth, Texas. “Big” meant a couple dozen guys and their wives. A gathering of everybody who has ever flown, crewed, or worked on a Yo-Yo would require reservations for maybe 75.

The quiet-plane pilots and observers–the enlisted men who operated the reconnaissance gear–had never been recognized. Their missions and equipment were largely secret and, to many of their fellow combatants, a little goofy. Their airplanes were weird-looking, unarmed, had all the horsepower of a midsize Chevy, and were pretty much homemade. A few of the vets had convened in California a year earlier and decided it was time to come out of the woodwork.

The ex-Night Stalkers I met in Fort Worth looked to be in their 50s, although one–Wilbur Curtis, a Lockheed tech rep who had volunteered to go to Vietnam as a middle-aged man to help assemble the YO-3As when they came out of their shipping crates–was in his 80s. A couple of the others carried bags with airline-crew badges, but most of them probably hadn’t touched a flight control since they’d been discharged.

We got together for a day’s worth of technology and history presentations in a room furnished with folding steel chairs and a cranky PowerPoint projector perched on a stack of books. One wall was papered with a minutely detailed, ceiling-high map of Southeast Asia dotted with perhaps 75 little arrow-tabs marking places where North American Rockwell OV-10 Broncos had crashed–green for rescued crews, yellow for those taken prisoner, red for KIAs–for this was the club room of the national OV-10 Bronco Association.

Broncos had big guns and even bigger rockets and a pair of powerful turboprop engines and looked like a North Vietnamese Army truck driver’s nightmare. YO-3As, which sometimes worked in conjunction with the Broncos as their targeting aircraft, looked like skinny-winged, high-performance sailplanes with propellers. This is not surprising, since that’s basically what they were–highly modified Schweizer 2-32 gliders with six-cylinder Continental O-360 engines in the nose, the airframe totally remanufactured, strengthened, flush-riveted, and equipped for its new mission by Lockheed.

Les Horn had gone to Vietnam to see if it was possible to improve the effectiveness of the Navy’s riverine interdiction craft–including, incidentally, the kind of fast boats that John Kerry once conned. “They were jet-drive, pretty fast, but you could hear them coming from 15 klicks [kilometers] away,” Horn says. The Vietcong often melted into the villages and forests long before Kerry and his guys arrived.

Horn first thought of using observation balloons, but as he quickly realized, “They’re very quiet, but they’re also very hard to control.” He had a degree in physics and was also a Navy pilot, so he started analyzing what produced noise on an airplane–mainly the propeller, the engine exhaust, the mechanicals of the engine itself, surface cavities and protrusions, and form drag–and how to mask, attenuate, and dissipate it.

Oddly enough, a small group of engineers at Lockheed’s Missiles and Space division had been thinking along the same lines, and in one of the ideal matchings of talent and task that the military occasionally achieves, Horn was plucked out of the paddies, flown back to California, and plugged into a Defense Advanced Research Projects Agency assignment at Lockheed.

Horn knew that the area to concentrate on was muffling midfrequency noise. Low-end noise was hard to hear until it was a lot louder than midrange noise, and we all know the truism that only dogs can hear very-high-frequency noise. Horn also found that just a small amount of background noise (insects, a little wind in the jungle trees at night) could mask the residual noise of a superquiet airplane. The key was to make the airplane superquiet by dampening that midfrequency noise.

Using Horn’s research, Lockheed built an ungainly proof-of-concept vehicle called the QT-2, a Schweizer 2-32 with a little 100hp flat-four Continental O-200 engine in a soundproof box on top of the fuselage behind the pilot. QT supposedly stood for “Quiet Thruster,” but the designation had to come from somebody familiar with the old-fashioned phrase “on the Q.T.”

Everything was either off the shelf, handmade by Lockheed fabricators, or commissioned from individual outside craftsmen. The total budget for two QT-2s was $100,000, chump change in an industry that would soon become infamous for building $700 cargo-plane coffeemakers.

A prop shaft ran awkwardly above the cockpit, driven by rubber belts that both eliminated gear- and chain-drive noise and substantially reduced crankshaft-to-propeller rpms. It is, Horn points out, the “only full-size aircraft in the world driven by rubber bands.” The shaft stretched to a four-blade wooden prop atop a big pylon on the nose of the airplane–a pylon that was, in effect, an extra vertical fin, which did little to enhance the handling qualities of the already awkward QTs.

The props (several were tried, including a six-blader) were handmade by a man named Ole Fahlin, whose reputation had been established not in the military-industrial complex but as a supplier of custom wood props to homebuilders and formula air racers. Fahlin would come out to the ramp between test flights of the original QT-2 and tune the prop by eye with a common wood rasp–take a little off here, reshape the blade there. “I don’t know how he did it,” Horn admits.

Two of the QTs were sent to Vietnam for a highly successful operational test, but the 210hp, retractable-gear YO-3As that followed them were the surveillance platforms that the Army really wanted–fully operational, 3,100-gross-pound airplanes strong enough to carry a reasonable fuel load, lots of electronics and a crew of two under a big bubble canopy. (Schweizer 2-32 sailplanes weighed just 1,400 pounds at gross.)

The YO-3As flew at night and were essentially invisible, camouflaged in a light/dark-gray pattern to hide them against a cloud-mottled, semi-moonlit sky. More important, they were as close to silent as a powered airplane has ever been. “People told us they sounded like a flock of birds passing overhead,” says observer Mark Kizarik, a front-seater.

“The pilot sat in back, because the observer needed the visibility,” explains Karl Forsstrom, another former observer. “In the Army, pilots were all officers, while the observers were enlisted men–which created a lot of confusion when we’d land at an Air Force base and some spec-5 would crawl out of what everybody assumed was the pilot’s seat, with a captain in back.”

The Yo-Yos sought their targets with infrared spotlights and a light-amplification system. The observer peered through a handheld IR scope about the size and weight of a roll of steel paper towels and tried to keep from barfing. While the airplane banked and orbited in the dark, he had one eye on the ghastly, artificial bright green of the optics and the other on the dim instrument-lighting redness of the cockpit. He was looking for campfires, cigarettes–anything hot.

“We found a lot of sampans,” George Walker says. “A soldier is a soldier wherever he is, and he’ll light a cigarette or start a fire if there isn’t somebody right there to tell him not to.”

“We had two tasks,” Forsstrom explains. “One was simple reconnaissance–go out and see stuff, and bring back information. Or if we had enough fuel onboard and the target was important, we’d hang around and call in artillery.” Yo-Yos also worked with an Army Huey gunship squadron that had infrared capability. The YO-3As would find the target and call in the gunships. The Vietcong would hear the Hueys from miles away, of course, and put out their fires and other heat sources, but by then it was too late. The YO observers would light up the enemy with their infrared spotlights, “and the Huey gunships would come in and engage the target on their first run,” Forsstrom says.

Few are aware, since the silent-surveillance program was a secret for decades, that the YOs were the first airplanes in the world to carry laser target designators, the systems that today guide smart bombs to their destinations. The Yo-Yo’s laser designator beam was sent down through the observer’s scope optics, a process that weakened the beam enough to make it ineffective above a relatively low altitude. It didn’t help that there wasn’t yet any ordnance in the inventory that used laser guidance, but Lockheed was pioneering a concept that would eventually yield extremely effective military applications.

“They didn’t work very well, maybe didn’t work at all, but it was a beginning,” says Sherman Seltzer, Lockheed’s chief engineer on the project.

Ultimately, the Yo-Yo program became a forgotten backwater. “It simply wasn’t so good a system that we could go out and convince Congress to spend more money on it,” Walker admits. Of the nine airplanes sent to Vietnam, by mid-1972 six were left. The other three had been lost in accidents, not enemy fire. “The war was winding down,” Walker recalls, “and we’d found that 85 percent of our sightings had been initiated by the pilot, who had then directed the observer and his night scope to it. So we could have achieved pretty much the same results by taking a well-muffled single-seat airplane, given the pilot a Starlight scope, and done away with all those sophisticated electronics.”

Yet today, the Department of Defense has issued a Request for Proposal that is now in the hands of Lockheed, Schweizer and other potential contractors. It asks for a low-altitude, prop-driven, manned, low-cost, quiet, covert reconnaissance aircraft for situations in which high-tech radar stealthiness is not required. Its probable use? Tracking Middle Eastern insurgents or potential terrorists, one can safely guess. 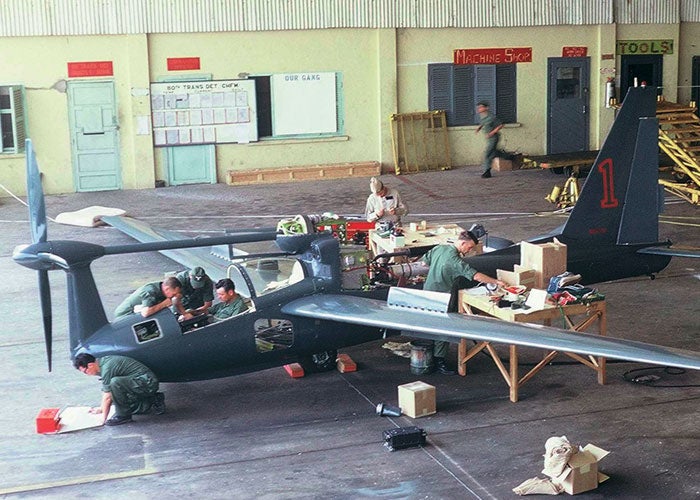 Lockheed and military personnel tweak a QT-2 at an airfield in the Mekong Delta. 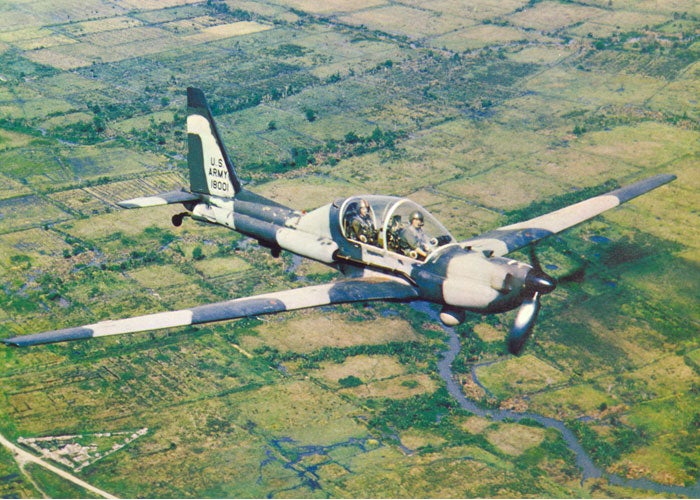 A rare sunlit run for a YO-3A, whose mottled gray camo made it almost invisible at night.