Looking for the Beginning of Time 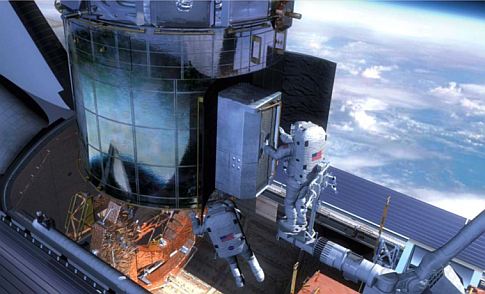 When astronauts pay a final visit to the Hubble Space Telescope next week, one upgrade in particular will illuminate the darkness like never before — and it involves taking out the corrective lenses that let Hubble see clearly for the past decade and a half.

The Cosmic Origins Spectrograph, a fridge-sized instrument that will be installed in place of Hubble’s original corrective optics set, will help astronomers learn more about the large-scale structure of the universe. Scientists hope it will help explain how stars and galaxies evolved; how the building blocks of life, like carbon and iron, came to be; how matter is distributed in the universe; and, well, what the matter is.

Spacewalking astronauts will also install a new, improved camera, which will continue snapping cosmic postcards for another five years. But with COS, Hubble’s next phase will focus on the science of the unseen, to help astronomers better understand the dark materials the pictures can’t capture.

“All the things that you make planets and life out of, those were made inside stars somewhere, so if they are out in intergalactic space, presumably they got blown out there, got blasted out there by the stars,” said Michael Shull, an astrophysics professor at the University of Colorado and a member of the COS team. “That’s one of the forefront issues — not only how much matter there is, but what it is.”

Spectrographs break down light waves into their constituent colors, the way raindrops separate sunlight into a rainbow. Any object that emits or absorbs light can be studied with a spectrograph. By examining spectra, scientists can figure out what makes up the light they’re seeing. The gravity of cold dark matter, which we can neither see nor fully understand, pulls regular matter into what’s known as the cosmic web, filaments of intergalactic gas separated by huge voids.

The COS will use quasars, which are distant, star-like objects, as lighthouses sending faint signals through that web. Some of the quasars’ light is absorbed by the material in the web, and if scientists can determine which parts of light were soaked up, they can figure out the structure of whatever absorbed it.

“At every point, when the light from a distant object cuts through one of those filaments of dark matter, we’re going to pick up the missing ordinary matter — hydrogen, helium, oxygen, all the heavy elements, and we’re going to figure out what (the obscured matter) is made of,” Shull said. “By looking very carefully, we’ll be able to see these little wispy filaments that no one has ever seen before.”

He compared the process to a CT scan, in which several images are combined to produce a picture of the entire human body’s structure.

“Every spectrum pierces the cosmic web at a different angle. If you get a number of them, you can piece together what it looks like,” he said. “Our search is for the intergalactic medium. It’s moved beyond ‘where is the missing matter?’ We want to figure out, what is it made of, and how did it get there?” 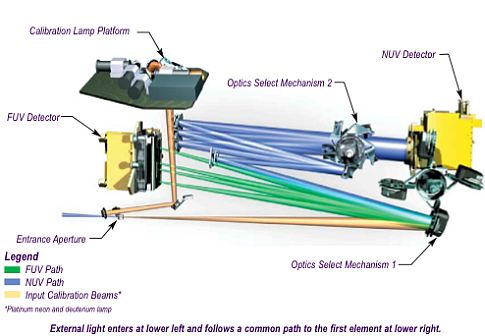 To make room for COS, astronauts will take out Costar, the “Corrective Optics Space Telescope Axial Replacement,” which corrected Hubble’s off-focus main mirror. Its installation in 1993 was one of NASA’s great successes, and its removal marks a new era for the telescope, whose new instruments all come with corrective optics.

Frank Summers, an astronomer and outreach scientist at the Space Telescope Science Institute in Baltimore, said the mission will be like upgrading a computer’s motherboard, memory and power.

“You feel like you’ve got a whole new computer, even though the chassis and the box and the monitor stay the same,” he said. “We do the same with Hubble. The barrel, the mirrors and the basic stuff stay the same, but we swap out the electronics on the back end that process the light.”

It’s a fitting evolution for the telescope, which is a scientific instrument first and foremost, Summers said.

“Hubble is not meant to be our Instamatic camera in space,” he said. “It’s meant to extract science from these images … It’s designed to see what the human eye can’t see.”

COS will do that better than other spectrographs because it’s designed to process light more efficiently. Scientists won’t know until it’s installed, but it will be between 10 and 30 times more efficient than Hubble’s currently defunct Space Telescope Imaging Spectrograph, Shull said.

Telescope time on Hubble is broken up by orbits, and COS’ high efficiency will accomplish in one orbit what used to take 20 orbits. This makes scientists happy, especially when they have 550 orbits to use, like Shull does. They can use fewer orbits to see the same objects, or they can look at much fainter objects.

Astronauts also plan to fix STIS, which stopped working in 2004. If astronauts can fix it, the two spectrographs will provide a full set of space prisms.

Shull — whose connection to Hubble goes back to his PhD. thesis adviser, Lyman Spitzer, who first proposed a space telescope in 1946 — said studying cosmic origins would not be possible without an observatory like Hubble.

“That’s why we love Hubble,” he said. “I think it will be very exciting for the next five years.”