That may make addicts more likely to have other psychological disorders 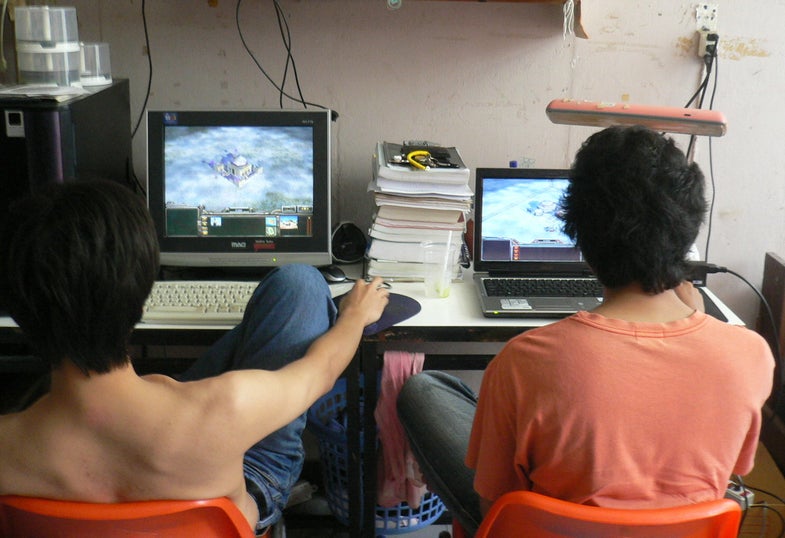 For the thousands of teens with internet gaming disorder, the symptoms can look a lot like any other addiction: A lack of control over the time and money spent on gaming, distance from family or friends, neglected schoolwork. And, as with other addictions, patients’ brains may look different too, according to a new study in the journal Addiction Biology. Teens with gaming addictions seem to have stronger connections between several different parts of the brain. And while that’s not necessarily a bad thing for how the brain functions, it may lead to a greater likelihood of concurrent psychiatric disorders.

In the study, the researchers took fMRI scans of the brains of 78 teenage boys diagnosed with Internet gaming disorder, and 73 subjects without the condition. Then they compared the connections between 25 different regions of the brain in the addicted subjects versus the controls.

It turned out that the teens with internet gaming addiction had much stronger connections between several different regions of the brain. Some of these may boost the boys’ cognitive performance. For example, a stronger connection between the dorsal anterior cingulate cortex and bilateral insulae may allow the subjects to react more quickly to important events, like an attack in a video game, for example.

“Hyperconnectivity between these brain networks could lead to a more robust ability to direct attention toward targets, and to recognize novel information in the environment,” study author Jeffrey Anderson told PsyPost. “The changes could essentially help someone to think more efficiently.”

But others were troubling to the researchers. A strong connection between the dorsolateral prefrontal cortex and temporoparietal junction is thought to limit a person’s impulse control and can be found in patients with Down syndrome, schizophrenia, and autism. These sorts of connections may make a person more easily distracted, bolstering previous findings that patients with internet gaming disorder have a higher frequency of other neurological disorders such as ADHD.

The study provides a good jumping off point for future research into the neuroscience of internet gaming addiction. It didn’t include females, so it’s hard to make broad generalizations about the brains of all patients with internet gaming addiction, especially since female gaming addicts also have other mood disorders more often than their male counterparts, as the study authors note. And while the researchers hypothesize that gaming may have strengthened these neural connections over time, it’s also possible that people with those connections were simply drawn to video games.

In future work, the researchers plan to assess how these neural connections affect subjects’ cognitive performance.