Stegosauruses Were Champion Fighters With Their Spiked Tails 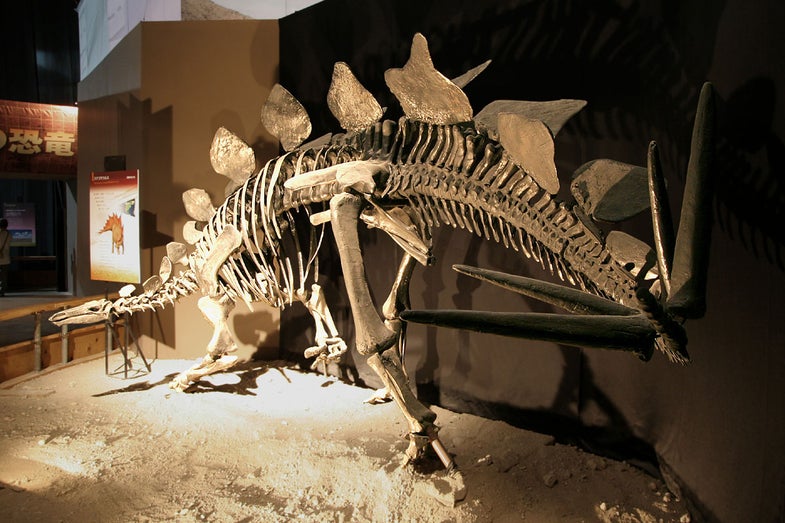 Unfortunately for the Allosaurus, it turns out that those spikes on the Stegosaurus tail weren’t just for show. Even with a powerful tail, Stegosauruses were assumed to be fairly slow and lumbering, and none too bright, with a brain the size of a tangerine. But in a poster presented at the Geological Society of America conference, researchers found that in at least some interactions between the two species, the Stegosaurus had the last laugh.

The researchers examined the remains of an Allosaurus and found some pretty damning evidence that the carnivore died from the tail of a Stegosaurus. Namely, a hole in the pelvic bone that matched the shape of Stegosaurus tail spikes from the same period of time.

“A massive infection ate away a baseball-sized sector of the bone,” paleontologist and author of the poster Robert Bakker said in a press release. “Probably this infection spread upwards into the soft tissue attached here, the thigh muscles and adjacent intestines and reproductive organs.” Because there was no indication of healing around the wound, it’s likely the Allosaur died of the injury.

Scientists had known for a while that Stegosauruses had incredibly strong, flexible tails, which they were able to maneuver with ease. But direct evidence of the species fighting prowess has been lost in the fossil record, which typically only records traumatic damage to bones, not soft tissue, where presumably a lot of injuries to predators would have occurred. Now, there is finally proof that Stegosauruses were fantastic fighters. In this case, the researchers believe that the Stegosaurus would have had to twist its tail so the spikes were facing the right way and then deliver the blow upwards with a considerable amount of force.

Don’t feel too bad for the Allosaur though. As the authors note in the abstract, “we interpret the Allosaur as a victim of herbivore defense.”