Everything you need to know about male hormonal birth control

There are several promising options in the works. 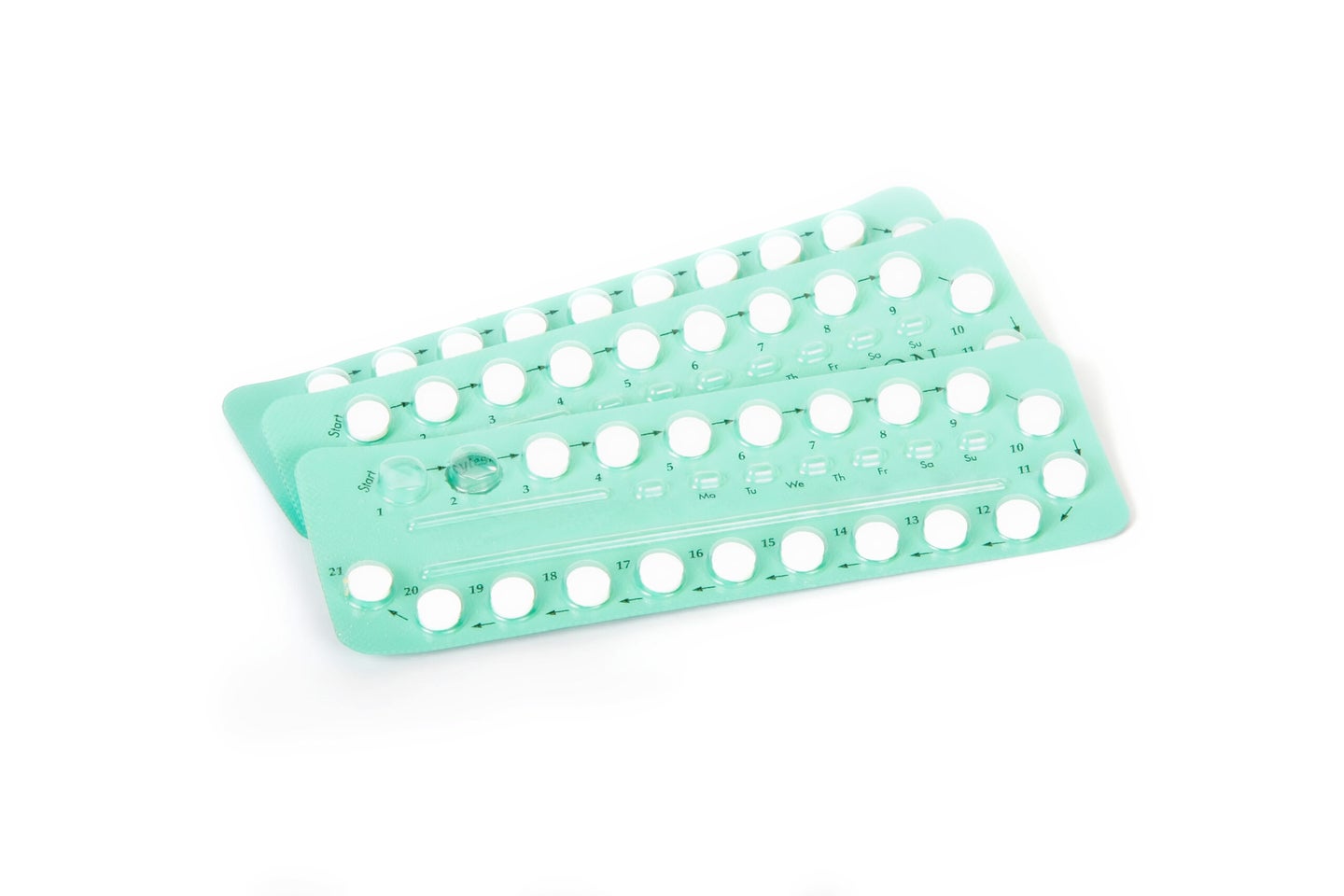 The invention of hormonal birth control revolutionized women’s healthcare, but for the past 70-odd years it’s also meant most of the contraceptive burden has been on women. And for a lot of people of all genders, that’s a problem.

All long-term methods of birth control come with side effects, from acne to mood swings to painful periods. Anyone taking hormonal contraceptives is probably dealing with some kind of unpleasant trade-off, and guess what? They (and their partners!) may not want to anymore. But in heterosexual relationships, the burden is generally on whichever person has a hormonal option. That isn’t to say that there aren’t straight men who’d like more control over their fertility. A majority of them say they’d welcome a male version of the pill, whether it’s to spare their partner from unfortunate side effects or because they want some control over pregnancy prevention.

But now—finally—equivalent versions are coming out for men. So here’s the lowdown on exactly what those options are and when you’ll be able to get your hands on them.

Like many existing birth control options, these new methods work by preventing the egg and sperm from meeting in the first place. For folks with testicles, that means decreasing the sperm count in semen to the point where you’re considered infertile (if you have ovaries, hormonal birth control prevents you from ovulating each month). And also like existing contraceptives, the new pills and topical gels in development use a combination of hormones.

Testosterone works together with progestin, another type of hormone that both sexes have, to suppress yet other types called luteinizing hormone (LH) and follicle-stimulating hormone (FSH). Sufficiently low LH and FSH prevent sperm from forming, but have the unfortunate side effect of decreasing testosterone—that’s why you need replacement testosterone in the contraceptive.

There’s been research into just how low sperm count needs to get before a person is infertile, and endocrinologists developing new contraceptives are starting with those numbers as a baseline. In theory, sperm counts below one million per milliliter are considered low enough to make pregnancy extremely unlikely.

So far, the evidence suggests it does. Clinical trials for these new methods haven’t been going on long enough to reach phase 3, which is where you test a drug to see how effective it is against a placebo. Right now, most of the potential medicines are in phases 1 or 2, which use much smaller groups of participants to assess how safe the drug is and whether it seems to be working as planned.

In the most recent trial of the inconveniently named 11-beta MNTDC pill, researchers reported that the drug successfully suppressed LH, FSH, and naturally-occurring testosterone while participants took it for a 28-day cycle. After they stopped, their hormones went back to normal. That same team also tested a related pill in 2018 and found similar success rates. There’s also a topical gel, which works on the same principle as the pill, that can also suppress hormone levels below the necessary limit.

These most recent trials have all gone without a hitch. There have been side effects, ranging from lowered libido to acne to fatigue, but they haven’t been bad enough to stop the testing. In these early-phase trials, that’s the whole point—if you start giving the pill to people and the side effects are sufficiently bad to make them drop out, or to make it unethical to keep giving them the drug, you have to stop.

Back in 2016, one trial of a hormonal injection stopped after an unusually high number of men started reporting adverse effects. The trials’ review panel decided it was too risky to keep going. Plenty of media outlets mistakenly interpreted this as men being too wimpy to deal with the kind of side effects that millions of women experience every day. But that’s not what happened. For starters, this trial showed much higher rates of adverse effects than existing female birth control. For another point, 75 percent of the men actually said they were happy to continue. Still, many of the adverse outcomes the men reported were exactly the kind of thing that women complain about on their own pills.

Isn’t it still unfair that women are expected to deal with more side effects?

Yes, it is. But there are two factors here that you might not be considering.

First, unfair as it is, male birth control is being developed in an era with much more stringent regulations about what kinds of side effects are acceptable. And, as one researcher pointed out in a recent AMA on Reddit, we know much more about the human endocrine system now than we did then. That means researchers have to test for many more potential physiological changes in men’s bodies, resulting in many more potential reasons to hold up a trial. Researchers largely failed to look out for female patients while developing the first hormonal contraceptives, but that doesn’t mean we should be that careless all over again. What’s more, we’ve developed much better oral contraceptives for women in the intervening decades. The pills available today have fewer side effects than the original formulations available in the ’50s and ’60s.

Second, as one of the researchers pointed out, the burden of pregnancy itself is unbalanced. Even for heterosexual couples in long-term, committed relationships, there’s generally only one partner actually at risk of becoming pregnant. The person liable to end up pregnant is always going to have at least a slightly higher motivation to take birth control. At the time the first options came to market, the social stigma and health risks of an unwanted pregnancy were even higher than they are today. It’s not surprising that female patients took the side effects of the original pill in stride, because it had the power to radically change their lives. While the world is quite different today, that same power imbalance means cisgender men will be less likely to accept unpleasant or dangerous side effects, and drug companies know they won’t sell a product unless the downsides seem negligible.

When is it going to be available?

Probably not for quite some time. There are several birth control options moving forward at once: two pills, a topical gel, and the non-hormonal Vasalgel, which is a polymer injected into the vas deferens to physically block sperm. All of these are in phase 2 trials, but that means we’ve still got to wait for researchers to publish the results, recruit for phase 3 trials, and complete those trials. Then we’ll wait some more for pharmaceutical companies to manufacture them. The chief of the NIH’s contraceptive development program told Vox last year that it’ll be at least a decade until the first products hit the market, and the team behind this latest pill study estimated their own work wouldn’t be widely available until around 2030.

Can I participate in one of the trials in the meantime?

Yes, you can probably sign up, though there might not be any trials in your area. You can find more information about the pills and the topical gel at the Center for Male Contraceptive Research & Development, which is recruiting participants near Los Angeles, Seattle, and Kansas City, and you can learn more about the trial itself on the NIH’s clinical trial site. You can also sign up to get on a mailing list for information about Vasalgel at the Revolution Contraceptives website.

It’s worth noting that in order to participate in a trial testing for efficacy, you have to be willing to have sex without using another form of contraception. Like female birth control, researchers working on male birth control need to know the efficacy rate for typical use. In these trials, the researchers monitor sperm levels, and once those levels are sufficiently low for enough time, the subjects and their sexual partners are supposed to discontinue whatever other forms of contraception they’ve been using. That may not work for your life, since there is, of course, a non-zero chance of pregnancy. And it’s absolutely not a good idea for people who aren’t in committed relationships, since condoms—the only way to protect against STI transmission—would muddy the results. On the other hand, there’s no form of birth control that’s 100 percent effective (other than abstinence). So if you’re not in a hurry to have a kid, but you and your partner are ready to deal with a pregnancy should one arise, you might be an ideal trial candidate.