What's in your water bottle? 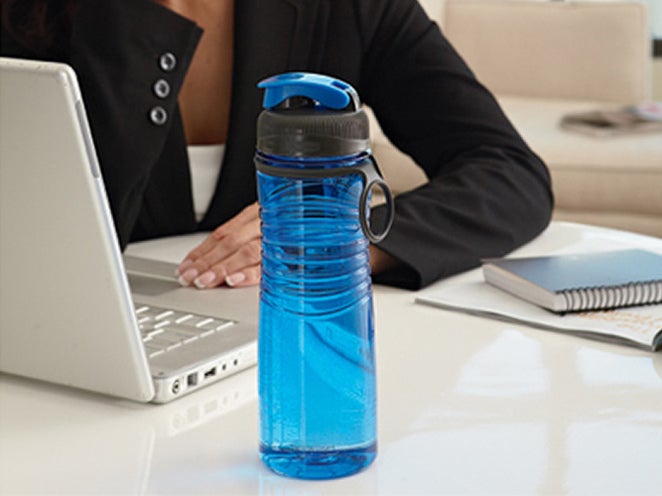 A chemical called BHPF—found in some ‘BPA-Free’ plastics—may cause harmful outcomes in mice, according to a study published Tuesday in Nature Communications.

BPA, or Bisphenol A, has come under scrutiny in recent years, with studies suggesting that the chemical might mimic estrogen in the body in ways that are harmful to human health.

“In recent years, BPA was shown to have estrogenic activity, linking BPA to endocrine diseases and to an increased incidence of endocrine-related cancers,” lead study author Hu Jianying of Peking University told PopSci over email. “Because materials synthesized with BPA were widely used in packing materials for food and beverages, and BPA can be released into food from such containers, many countries have restricted or banned the use of BPA in materials or containers that come in contact with food, especially baby bottles for milk or water.”

Although BPA is not banned in the United States—in fact the US Food & Drug Administration ruled it safe for use in food packaging in 2014—manufacturers have still phased it out in response to consumer concerns. They’ve instead turned to plastics marketed as BPA-free, including BHPF.

In recent years, BHPF has shown up in all sorts of adhesives and plastic materials—everywhere from the aerospace and automobile industry to coatings used to protect floors. “So we are interested in the human exposure and risk due to the usage of BHPF,” Hu said.

The first step in that process was exposing cells—in this case yeast cells—to the chemical. Because BPA was known to be estrogen-like, the researchers exposed cells similar to those that bind with estrogen in humans. They discovered that while BPA mimics estrogen, BHPF actually blocks the hormone. This was confirmed via a computer model that simulates the effects of BHPF on cells. The model showed that BHPF fit into the antagonist pocket of estrogen receptor—it binds to an estrogen receptor but doesn’t elicit a response.

This sort of multi-step analysis is beneficial, says Maricel Maffini, because, “each step gives you more information and you can fine tune the type of testing you do next.” Maffini, who wasn’t involved in the new study, is a scientific consultant who works with public interest organizations and businesses on issues related to chemical safety—especially for chemicals that interact with our food.

The next step, in this case, was testing in animals. The researchers exposed four groups of pregnant mice to four different concentrations of BHPF. The mice exposed to BHPF experienced a host of pregnancy-related issues. This included low uterine weight, inflammation and thinning of the womb lining, and worse pregnancy outcomes. The mice exposed to the highest dose of BHPF had 24 percent fewer live pups per litter than the control group.

The study authors point out that we can’t extrapolate from mice onto humans. “[But] when you have a drug and you give it to animals, people take what happens to the animals pretty seriously and say this may happen in humans,” Maffini said. “Somehow there is a resistance to think the same way when we are testing chemicals. There is a tendency to say that the rat is not a human, the mouse is not a human, we don’t know if the same amount of chemical…is going to do anything to the human. We are different.”

But it’s not all that clear how different we might be. A 2012 World Health report noted that “significant knowledge gaps exist on the association between exposure to endocrine-disrupting chemicals and adverse pregnancy outcomes, even though the incidence of these outcomes, such as spontaneous abortion, stillbirth, low birth weight and fetal death, has increased in many countries over the last decades.”

And those knowledge gaps leave many concerned.

“In the U.S. there are no requirements for testing in animals unless a lot of the chemical gets into the food supply,” said Maffini. “There is definitely no requirement to test for potential endocrine disrupting properties in chemicals—not even doing a computer modeling study, or an invitro study, similar done to those that are done in report.”

Similarly, we tend to test individual ingredients that are used to make a particular product, but not the product itself.

“We can test sodium independently, we can test chloride independently, and get very bad, toxic data,” said Maffini, “but if we look at salt—the sodium and the chloride together—we’re going to have a very different picture of the toxicity.”

But none of this matters if we’re not coming into contact with BHFP—it’s only a potential problem if humans are exposed to it. To see if we are being exposed, Hu and his colleagues tested 100 students for the presence of BHFP. Seven percent of them tested positive for the chemical. The testing wasn’t done to prove that BHFP is harming human health, but rather serves to suggest that at least some of us are being potentially exposed to it—and that we need to look deeper into what this might mean. How dangerous might BHFP be, and how is it getting into our bodies?

We have some clues about the latter question: because BPA rose to such prominence due to its use in plastic drinking bottles, and because a lot of Chinese students drink boiled water out of plastic water bottles, Hu’s team tested polycarbonate bottles—both baby bottles (polycarbonate baby bottles are banned in China, so they had to purchase them from abroad) and adult drinking water bottles—for the presence for BHPF. They found that water samples taken from all three baby bottles tested positive for BHPF.

Similarly, they detected BHPF in water from two bottles made of Eastman Tritan’s BPA-free copolyester. It’s unclear if the bottles Hu tested are available in the United States. But the U.S. might not be regulating the use of BHPF at all. A survey of three FDA databases—Indirect Additives used in Food Contact Substances, Inventory of Effective Food Contact Substance (FCS) Notifications, and the Threshold of Regulation (TOR) Exemptions—failed to turn up references to either Fluorene-9-bisphenol or BHPF. If the FDA has deemed BHPF safe to use, it should show up in one of those databases.

In an emailed statement Eastman Tritan claimed that “no fluorene-9-bisphenol nor any other bisphenol analogs were added to Tritan,” and that “based on the chemistry of Tritan and the lack of bisphenol analogs, the results in this paper are not expected.”

The statement went on to note that in a 2012 study, researchers tested seven bottles made from Tritan resin and found that they did not release BPA “nor plasticizer or other substances.”

“Polymer migration testing and polymer chemistry can be very complex,” the statement added. “It is more likely that the detected substances were contamination from their lab equipment (other plastics, gaskets, seals, tubes, glassware, detergents for example) or the substances were misidentified.”

But in 2011, researchers on a different study found that most commercial plastic—including Tritan—leeches some kind of synthetic estrogen even when not exposed to microwaves, dishwashers, or boiling water, which are known to make plastics leech chemicals. Synthetic estrogens are worrisome, because estrogen hormones guide a host of biological processes—from growth, to puberty (even in boys, despite the fact that estrogen is considered a ‘female hormone), to reproduction. Eastman Tritan sued over the 2011 study and won.

It’s possible that both Tritan and the team sued in the 2011 lawsuit are technically correct—the two sides used different tests, and different definitions of estrogenic activity. Scientists are still trying to figure out what level of endocrine disruption can be considered safe, and the answer is likely different for each chemical. In the new study, researchers found that BHPF affected mice at much lower levels than BPA did.

The method of exposure matters, too. The FDA labels BPA as safe because it’s assumed that the primary mechanism of exposure is through eating and drinking, and the body excretes BPA in just six hours. But this ignores that some of us are drinking from containers made with BPA pretty much constantly, preventing us from ever fully expelling BPA from our bodies. Meanwhile, a number of studies looking at the presence of BPA in paper receipts have found that a significant amount enters the bloodstream by way of skin contact alone. A May 2015 study found that those of us who live near industrial sites can be exposed to a high level of BPA simply by living our lives as usual. It may very well be that the level of exposure from any single source might be low enough to be safe, but that the cumulative exposure could cause health problems. We don’t know yet—there needs to be more research.

“We think,” wrote Hu to PopSci, “that toxicity of substitutes should be assessed comprehensively, and regulations for substitution of chemicals should be developed in the future.” Otherwise, we risk introducing alternative materials that cause just as much harm.

“People shouldn’t be put in the position of selecting which are the safe products,” said Maffini, “the products should be safe.”

In the meantime, there’s always glass.