Lake Mead Has Dropped To Its Lowest Level Ever 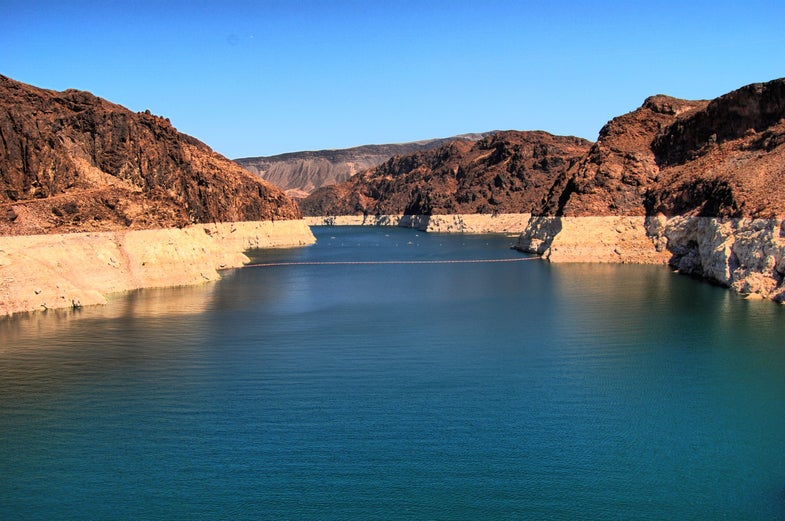 California isn’t the only one having a water crisis. Yesterday, Lake Mead sank to its lowest level yet. The watery behemoth created by the construction of the Hoover Dam in the 1930s was reduced to a mere 1,080.07 feet above sea level, minimally smaller than the previous record of 1,080.19 set last August.

The difference of 1.44 inches might seem small, but it has a lot of people worried. With an incredibly dry summer anticipated out west, experts fear that the lake could sink to a water level of 1,073 feet. For comparison, the highest water level in the lake was 1225.85 feet, recorded back in 1983.

Millions of people in the region rely on Lake Mead for water and electricity generated at Hoover Dam. Unfortunately, as water levels fall, it gets more difficult for the dam’s turbines to produce electricity. Engineers at the dam are installing turbines that could extend the ability of the dam to produce power, even if the water levels fall to 950 feet, but that’s a worst case scenario.

To address the decreasing water supply to communities in the region, engineers are also working on a much deeper intake point, the Third Straw, ensuring that a thirsty Las Vegas will be able to suck water from the bottom of the lake even as the surface level falls.

Read our feature on how the fortunes of Las Vegas will rise and fall with Lake Mead from our 2014 Water Issue.