How the Human Got His Thumbs 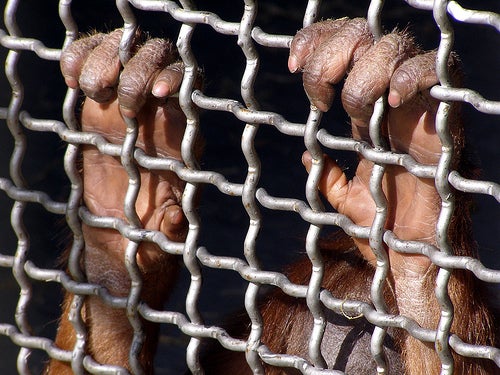 For decades, people referred to the non-coding bits of DNA between genes as junk DNA. Then, in the eighties scientists discovered that some of that junk DNA served an important purpose. The DNA attracted or repelled transcription factors and RNA, greatly enhancing or inhibiting the potency of adjacent genes. Now scientists have just found that one of those gene enhancers may be what separates humans and chimps.

Researchers from U.S. Department of Energy’s Lawrence Berkeley National Laboratory, publishing online in the most recent issue of the journal Science, placed human, chimpanzee and macaque versions of the enhancer into mouse DNA. The scientists also added a gene that would release a blue dye to show where in the mouse fetus the enhancer was most active. When the mice developed, the researcher saw that it was active in the hands, feet and throat. Additionally, the mice with the human version showed the most activity, with the chimp version producing some activity, and the macaque version producing very little.

The researchers then showed that the difference between the human and chimp versions of the enhancer result from a difference of only 13 nucleotides, a far larger number of changes than would be expected had the mutations been the result of drift rather than selection. The location of enhancer activity highlights the importance of the difference. Our hands, with their opposable thumbs, our feet, evolved for bipedal locomotion, and our throats, which allow us to speak, make up three key differences between humans and all other apes. Because of its role enhancing the genes that regulate the development of those regions, the evolution of this gene enhancer must have been a key step in the evolutionary separation of the human/chimpanzee common ancestor. Furthermore, by following the presence of this particular gene enhancer, researchers should be able to locate which genes are responsible for our differences from chimps and when they evolved. Mapping out humanity’s divergence from apes? Not bad for a bunch of DNA once thought of as junk.