How do those internet balloons over Puerto Rico work? 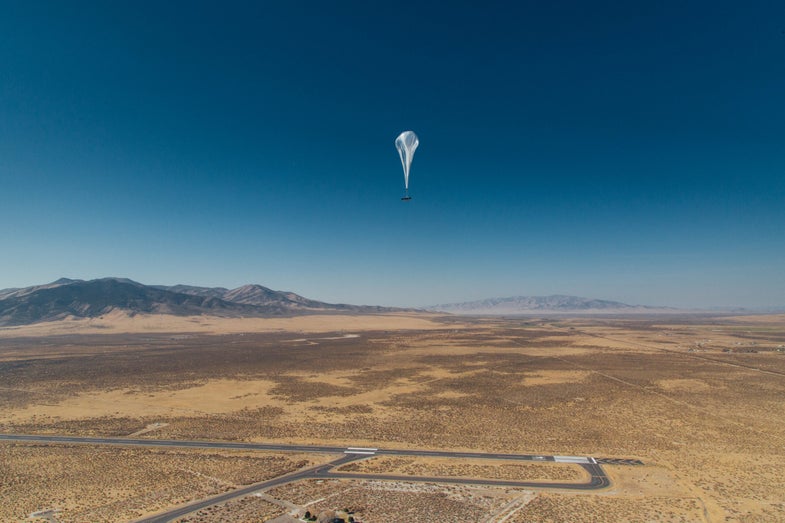 It’s been over six weeks since Hurricane Maria devastated Puerto Rico, leaving millions without power or access to reliable communication.

The storm clobbered the island’s communications infrastructure—after all, cell towers can’t produce a signal without power, and backup batteries only last hours. The hurricane damaged the above-ground fiber lines that connect towers to the main network, too. AT&T, for example, is using stop-gap measures like portable cell towers on trucks to help get the network back up, and says that 70 percent of the population there is now covered by their network.

And then there are the balloons.

While making repairs on the ground and taking other steps on terra firma, AT&T and T-Mobile are also tied into the network of floating vessels in the stratosphere.

Alphabet, Google’s parent company and the tech giant responsible for the balloons, calls the endeavor an “experimental technology.” In fact, the incubator at Alphabet that runs the project is known as “X, the Moonshot Factory,” or just X. The balloon initiative is dubbed Project Loon.

Think of each balloon as a cell tower in the stratosphere, tens of thousands of feet off the ground. They’re not producing Wi-Fi, but are making an LTE signal; each balloon can cover about 1,931 square miles with its signal. But that balloon-internet isn’t enough for someone to stream Stranger Things or even make a phone call. It’s just intended to allow people to do simple tasks like text or check email.

The balloons themselves need to receive that LTE signal from somewhere, and that somewhere is the ground, where both AT&T and T-Mobile are beaming it up. That means two things: you won’t be able to tell that the signal is coming from the sky, and you’ve got to have plans with one of those two carriers in order to use it.

Those balloons themselves are a ghostly white, about the size of a tennis court, and made from polyethylene. They lack engines, but do have solar panels to power the onboard equipment.

By coincidence, Loon already had a launch site (called “Chicken Little”) in Puerto Rico as part of the broader project, but these balloons traveled from a launch site in Nevada (called “Big Bird”).

Going with the flow

Since balloons are at the mercy of the stratospheric winds, the only way controllers can navigate them is by changing altitude to catch a different layer of wind.

The way they do that is interesting, though: there’s a smaller balloon inside the larger helium one. By pumping that interior vessel full of air from the atmosphere—or releasing that air out—the flying machine goes down or up. So the mechanism that’s moved Project Loom balloons some 16 million miles is very basic physics, though the navigation is far from simple. People on the X team have used computer simulations and data from the balloons’ real-world travel to create machine-learning algorithms that make it easier to get the balloons to travel from one place to another, or cluster in a designated location.

Want to learn more? Head over to Flightradar24.com, and scroll to Puerto Rico. You might spot six balloons in the region, all of them at altitudes higher than 50,000 feet. Project Loon, however, won’t confirm that those vessels are indeed theirs or how many exactly they’re using. The best we got from them is that there are a “handful” in the area.