Archive Gallery: 10 Ways to Beat the Heat Without Air Conditioning 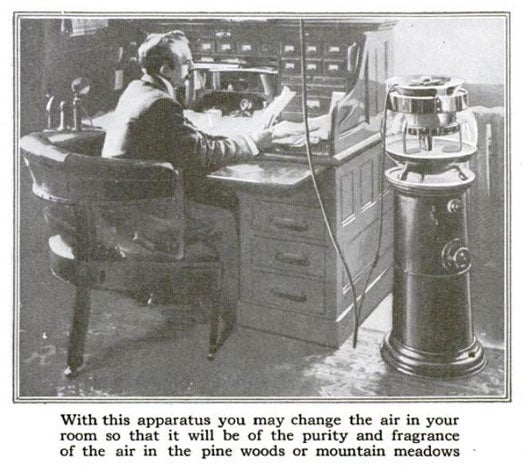 When you ask people what technologies they can’t live without, they typically name cars, the Internet, and indoor plumbing as essentials to living comfortably. But after suffering through relentless heatwaves this summer, we’re ready to rank air conditioning as our most indispensable luxury. While central air is less historically significant than the aforementioned technologies, we can’t imagine living, working, and sweating through mid-July without ducking into buildings chilled to Arctic temperatures.

Despite the ubiquity of air conditioning, less than a century has passed since people dealt with summer temperatures the old-fashioned way: by sipping mint juleps out on the porch. Out of curiosity, we glanced through a few summer issues in our archives to find a number of gadgets that, however strange, managed to work far better than even the iciest summer cocktail.

Up until the early 1940s, we put our faith in rudimentary window units and space coolers more than in central air. The prospect of changing a room’s temperature with the flip of a switch was so novel, we could only refer to it with glamorous terms like “manufactured weather” and “climate to order.” In addition to watching scientists experiment with so-called weather factories, we recommended a space cooler that would replicate mountain weather by blowing incoming air through a gentle spray of water. A few years later, we looked at supplementary air conditioning units that reversed the effects of a built-in furnace. After that, we studied how air conditioning could stimulate productivity in workplaces, which included gold mines in South Africa.

If you couldn’t afford fancy appliances, however, you could always place a block of ice in front of an electric fan. Or you could replace your curtains with wet towels. Central air was inevitable, but in the meantime, you could paint your house white and douse your window shrubbery with cold water while waiting for the technology to become affordable.

Before air conditioners became commonplace, we touted this portable heating/refrigerating plant as a convenient appliance for those who needed a little relief from the summer heat. The machine could not only emit both coolness and heat, but it could adjust the humidity level of your immediate surroundings — hence the option of instilling a “mountain meadow” atmosphere into your otherwise stuffy living room. Tubes filled with calcium chloride would dry out the air, while an electrically-powered suction fan could push the air through a watery reservoir to create a refreshing little breeze.

It wasn’t easy to keep cool in the days before home electricity. Not only were air conditioners mostly unheard of, but fanning yourself required some physical exertion. To combat the heat, one inventor created a rocking chair-operated fan for maximum relaxation and comfort. Overall, it was a pretty simple device. Rocking the chair would turn a large gear wheel forward, and a pinion attached to the wheel would set the blades into motion.

In April 1926, we ran a contest that asked readers to submit their cleverest ideas for cooling down in hot weather. The runner up whose idea is illustrated on the left suggested hanging a damp towel or muslin cloth over an open window to reduce a room’s temperature. To keep the cloth wet, he said, attach rollers to the top and bottom. Install a shallow pan of water at the bottom of the window so that whenever the cloth dries up, you can spin it through the water. The room should feel noticeably cooler after the wet towel filters incoming breezes.

Other ideas included eating foods like fresh veggies and raw fruits because they supposedly produce less heat than meat and sugar. Another reader suggested putting a plate of ice in front of an electric fan, while one man took the psychological route by claiming that getting overexcited, angry, or worried — that is, being hot-headed — would increase your core body temperature.

In addition to not needing the gadgets, the winning suggestion seemed a little counter-intuitive: “A hot shower bath followed by a hot drink, taken during the hottest part of the day” would do the trick, said John L. Ginster, who insisted that you’d feel cooler once your pores were open. For his idea, Ginster won $10, while the runners-up won $1 for their efforts.

In addition to using what is possibly the most ludicrous Popular Science headline ever, this article detailed how scientists at Johns Hopkins were developing rooms that could go from boiling hot to freezing cold in a matter of minutes. Back then, being able to manipulate one’s indoor climate by simply pushing a button was nothing short of a miracle. We visited Dr. H.W. Howell, director of the “climate factory” experiments at Johns Hopkins, who showed us how a complex ventilating system of heating and cooling coils, fans, water sprays, ducts, and channels let him toy with the temperature. In addition to promising comfort for the common man, Howell’s experiments allowed researchers to study how temperature and climate affect people’s ability to work efficiently. Being able to quickly adjust the room temperature helped them figure out that the discomfort caused by heat has more to do with how fast our hearts beat in hot weather than how our body temperature increases in hot weather.

(As far as the article title goes, scientists found that overweight subjects were much more tolerant of the heat than their skinny counterparts.)

After decades of dealing with hot weather the old-fashioned way, people were finally able to enjoy when air conditioning became more accessible to middle class consumers. This short feature describes an early cooling unit that, despite its name, was more like a dehumidifier than an air conditioner. These systems came in several different sizes and could double as radiators during the winter. In addition to circulating the air, they were equipped to filter dust and add moisturize to the air when the room got too dry.

Back in the day, air conditioning referred to heating the air as well as cooling it. Air conditioners had four main functions: temperature control, humidity control, circulation and cleaning. Instead of using condenser and cooling coils, the way modern air conditioners do, this one used a complicated system of spray nozzles and water pans to adjust air temperature.

While we typically install air conditioner units over small windows, this humidifier was designed to fit over a warm air furnace. You could either purchase a complete system, or you could attach individual air filters, blowers, or automatic auxiliary humidifiers to an existing heater. And if your home didn’t warrant an expensive air conditioner, you could always opt for a portable space cooler, which typically consisted of a wheel-bound machine that blew air over a block of ice.

According to this diagram, the plant would be located above ground. Three centrifugal refrigerating machines would chill the air and remove its moisture. Afterward, two powerful fans would push 400,000 cubic feet of cool air down the mines and through a passage 100 feet underground.

Now here’s something we wouldn’t mind owning even today: a portable space cooler weighing just thirteen pounds, water included. This model even came with a handle to facilitate transport. To circulate and cool air, the machine used brass buckets to pour water from a small reservoir over a fiberglass screen. A fan inside the unit would blow water over the webbing, thus creating air chilled by evaporation.

Can’t afford an air conditioner? Don’t fret — PopSci’s got you covered. In this feature from the summer of 1950, we recommended several simple, affordable methods for keeping one’s house from becoming a heat trap. For instance, installing an exhaust fan in front of an attic vent would push warm air out of the house. Painting the house a light color could also deflect heat, while dampening shrubs situated beneath your windows would significantly cool down summer breezes.

Those handy with DIY could also try building a cheap air conditioner out of spare parts. To cool your surroundings, this machine would use an electric fan to blow air through a continually-dampened excelsior filter.

While central air conditioning isn’t old-fashioned by any means, we thought we’d take a look at the technology from a 1950s perspective. The recent sale for a fully air conditioned three-bedroom home in Kansas City hinted at a future where the American middle class could afford houses equipped with central air conditioning. We predicted that it was only a matter of time before houses without central cooling systems became obsolete, as new air conditioned estates were selling for as little as $8,000 in Miami. Some houses offered a package deal with a furnace; others offered an air conditioner separate from, but attachable to an existing hot air vent. Either way, these novel new homes allowed residents to adjust the thermostat simply by hitting a switch. This not only seemed ridiculously convenient, but it meant that architects were no longer obligated to consider ventilation while designing a house. You could have all the windows on one side of the house without worrying that they would let in excessive heat. Likewise, you could lounge comfortably in a room with a windowless, solid wall since central cooling eliminated the need for cross ventilation.