Still no Luke Skywalker in sight, but the film lands December 18th

There’s been a disturbance in the Force. Several disturbances lately, actually: two new TV spots for the much-anticipated sequel Star Wars Episode VII: The Force Awakens hit the interwebs this morning, bringing us more revealing new footage about the story and characters. If you’re looking to go into the film completely spoiler-free, as blind to the plot as Luke behind a blaster shield, then proceed no further. But if you’re okay seeing what Star Wars parent company Disney/Lucasfilm thinks is enough new detail to whet your appetite, carry on.

The shot then cuts quickly from new character Rey (Daisy Ridley) to an all-new shot of Han Solo (Harrison Ford) standing in a winterscape, suggesting there may be some familial connection between the two. 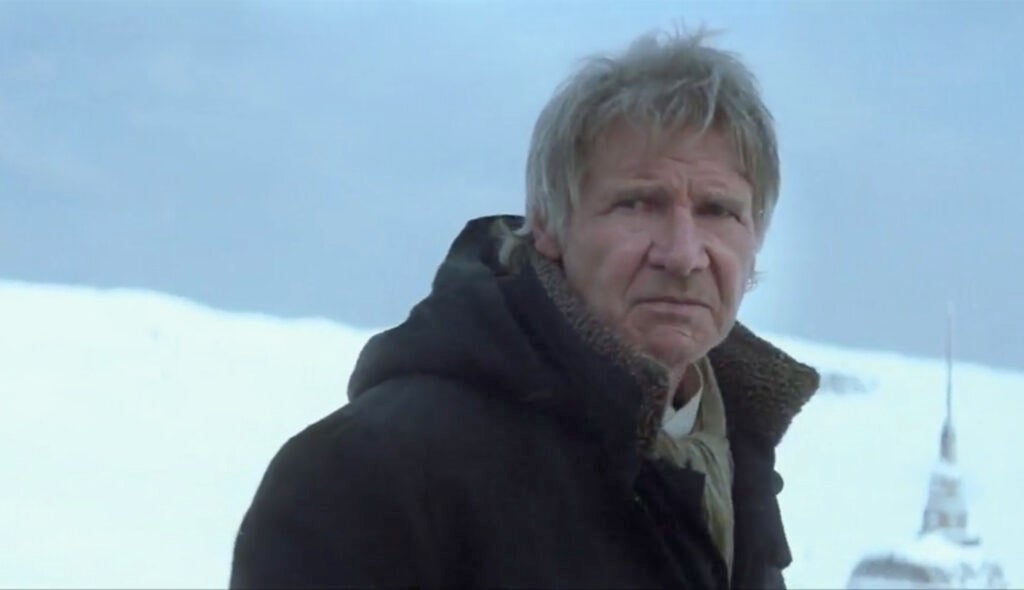 Still shot from a new 30-second spot posted on Twitter.

We also see a shot of Rey pushing a lever forward cutting to a scene of the Millennium Falcon tearing through a wintry forest, further suggesting Rey will pilot Han Solo’s iconic smuggling/transport ship in the new film.

The second spot, posted on the official Star Wars YouTube account is twice as long at a minute, and shows even more intriguing details about the film.

One shot shows an Imperial Shuttle like the kind used by Darth Vader in the original trilogy, expect this one is black instead of white. That’s accompanied by deep voice-over footage of what sounds a lot like the modulated voice of actor Adam Driver, who plays Kylo Ren, the film’s villain.

The latest TV spot for Star Wars: The Force Awakens shows a good view of a new all-black spaceship that looks a lot like the all-white Imperial Shuttle used by Darth Vader in the original trilogy.

Another new shot shows Han Solo handing Rey a Blaster pistol and telling her “you might need this” (seen above, at top). We also see a quick shot of a control room in silhouette with a figure that looks an awful lot like Leia standing in the middle, back toward us, and C-3PO off to the right edge of the frame sporting his new red left arm.

This shot of a control room from a new TV spot for Star Wars: The Force Awakens reveals several iconic characters at once: Han Solo appears at left, C-3PO appears at right sporting a new red arm, a figure resembling Admiral Ackbar can also be seen beside the protocol droid, and Leia Organa appears to be the figure in the middle turned .

Then there’s the most intriguing frame of the bunch: newbie hero John Boyega attempts to slice and dice a stormtrooper with a blue lightsaber (the one pretty much everyone presumes is Anakin’s, which Luke lost in Empire Strikes Back, understandably), but the trooper manages to block it with a energy staff of some kind. This is a pretty significant development as Rich McCormick notes at The Verge, considering the lightsaber has previously appeared to be able to cut through nearly everything in the universe like a hot knife through butter (except for other lightsaber blades, of course).

Finn faces-off with a Stormtrooper in ‘Star Wars: The Force Awakens’

New hero Finn wields a familiar-looking blue lightsaber against a Stormtrooper in ‘Star Wars: The Force Awakens,’ yet the Stormtrooper shows a surprisingly successful block with an energetic staff.

Finally, we also see Han Solo firing his blaster to provide cover for Chewbacca, with both on the move and in an apparent jam.

Han Solo and Chewbacca in ‘Star Wars: The Force Awakens’

Han Solo and his trusty sidekick Chewbacca must blast their out of another tough situation in this shot from a new spot for ‘Star Wars: The Force Awakens.’

There’s plenty of speculation about what it all means around the web—including some wild theories that may or may not turn out to be true—but we won’t know for sure the fate of any of these characters old and new till the film hits theaters on December 18th.