I glue stilts to ants

How do ants navigate back to their nests? Researchers assumed they relied on an internal pedometer. To test this theory, one scientist glued stilts to the insects. 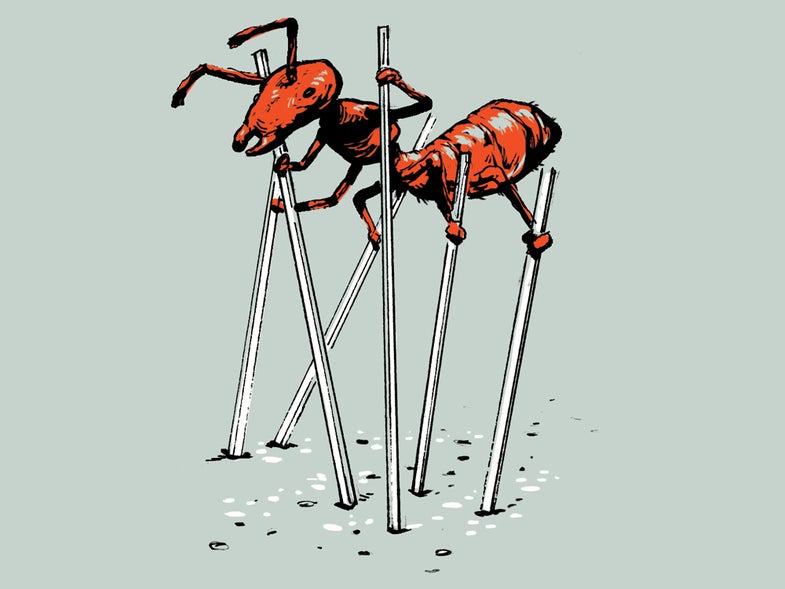 ↑ Matthias Wittlinger, researcher at University of Freiburg in Germany

In the salt flats of the Tunisian desert, Cataglyphis fortis ants will travel more than 120 yards from their nests in search of food. That’s like you or me walking 4 miles, through a landmark-free environment, for dinner.

For a long time, entomologists thought ants must count their steps in order to know how many were needed to return home. If they do this, I realized, then shortening or lengthening their legs would make them miscalculate the distance.

In summer 2005, I traveled to Tunisia to test ants’ internal pedo­meters. First, I captured them about 11 yards away from the nest. I lifted them with fine for­ceps, put them belly up in a plate of soft wax normally used in dentistry, and stuck each knee down to steady them. I then either trimmed the legs with scissors or super­glued a stiff pig hair to each limb to function as a stilt.

After surgery, the ant was still in homing mode. I would give it a food crumb and watch it run straight home. Sure enough, the ants with stilts walked past the nest, and the ones with short legs stopped too soon. The experiment sounds tricky, but it was easy compared with my old job: dissecting insect brains.