No we're not kidding, and yes that's a good thing. 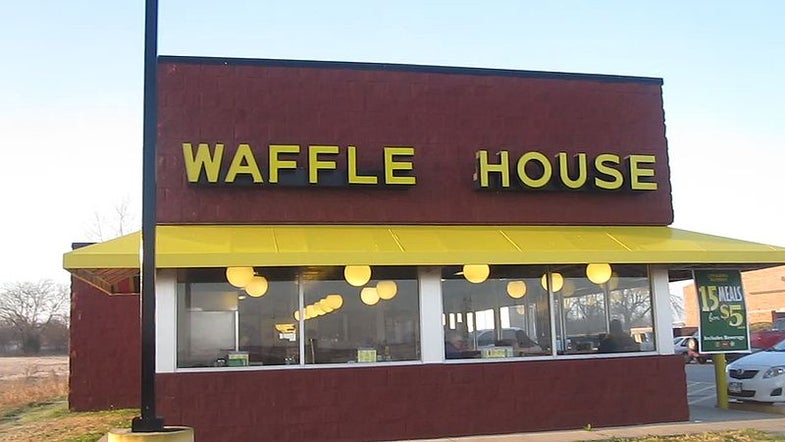 Moore, Okla., is currently running at Waffle House Index Level Yellow, and that’s not a joke. Craig Fugate, the head of the Federal Emergency Management Agency, has created his own informal system of rating disasters in a humanizing way, using the status of the local Waffle House as a measure of the impact of a natural disaster on a region or neighborhood. And if that sounds patronizing or nonsensical, read on, because it makes a lot of sense.

After a disaster–especially one of the magnitude of a Hurricane Katrina or the tornado that struck the southern Oklahoma City metro area on Monday–it takes a while to really gauge the state of things on the ground and to assess the overall level of damage. There are aerial photos of the devastation, sure, as well as anecdotal accounts of what’s happening on one block or the next, but a snapshot of the real impact on a community is hard to come by until an official accounting of the damage–both human and economic–can be made. And that takes a while.

Then there’s Waffle House. Waffle House is known–along with Home Depot, Wal Mart, and Lowe’s–for its resiliency during and in the days following a disaster. The company maintains pretty serious disaster planning year-round, as it sees itself and the service it provides–hot meals and hot coffee for first responders and affected members of the community–as important for helping communities get back on their feet. As such, Waffle House takes pride in its ability to remain open, or to quickly reopen, after disaster strikes a region. Fugate allegedly first used the phrase back in 2011 following the Joplin, Mo., tornado, stating to the Wall Street Journal that if you arrive at a place and the Waffle House is closed, you know the disaster is bad.

Moreover, Waffle House’s 1,600 locations are spread across 25 states in hurricane- and tornado-prone states, from Florida to Arizona and throughout the Midwest, as far north and east as Pennsylvania. And the restaurants are remarkably consistent throughout the country, in their construction, their menus, and their disaster-readiness. They all require basic utilities like electricity, water, and gas, though they can run at limited capability without them (by trucking in generators, propane, and clean water). All that makes for a good measure of comparison across the nation.

During Katrina Waffle House had to close 100 restaurants, earning it red status. But within 24 hours 60 were up and running again, upgrading many neighborhoods to yellow almost immediately (seven locations were fully destroyed). But it’s important to keep in mind that the index is more a measure of the status on the ground after a disaster–the availability of generators or grid electricity, or of clean water, for instance–than a measure of the disaster itself. The 2011 tornado that devastated Joplin, Mo., closed none of the areas Waffle Houses. So the region remained yellow and green even though 162 people were killed.

The yellow rating for Moore is something of a courtesy rating at this point, as the power at the single Waffle House location there remains cut and the generator was still in transit last we heard. So Moore’s Waffle Hosue is technically still closed (level red), though it should be up and running shortly (by the time you read this we may already be at a hard Waffle House Yellow). And while hot meals and hot coffee can’t make up for everything that was lost in Moore on Monday afternoon, if you’re going to rebuild a community it can’t hurt to start on a full stomach.