How to make an open office more quiet

Dull the roar of all those clicks, clacks, and workplace chats. 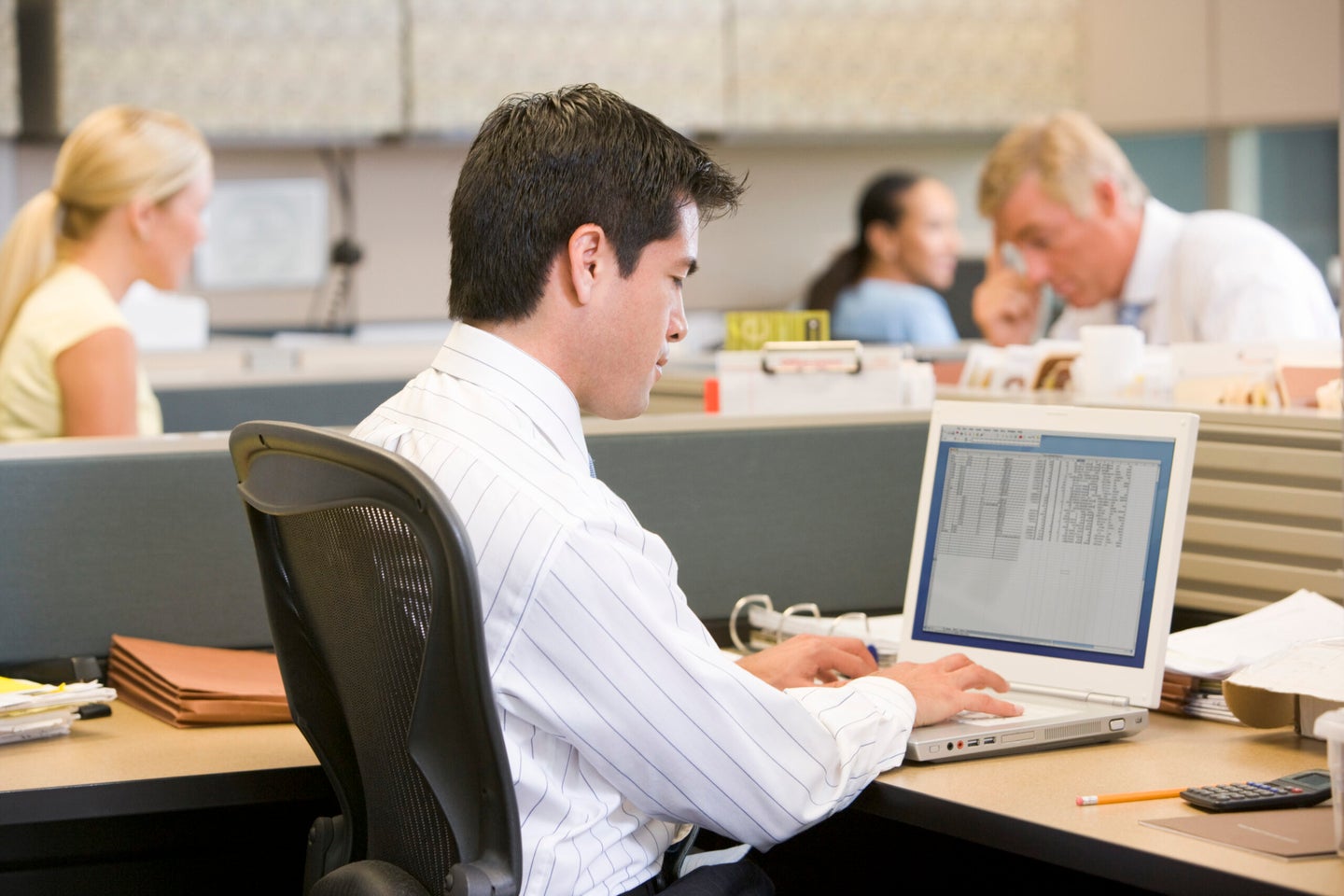 The open office is the most popular workplace layout of the 21st century, but it has a dark side. When everybody can see each other, the lack of privacy and overall noise tend to drag down morale and make people less productive.

Love them or hate them, they’re here to stay, so if you’re in one, we’re here to help you figure out how to dull the roar and get some work done.

Open offices can be distracting

Noise, of any sort, ruins our day. Sudden loud sounds and other aural aggravations may amplify depressive and anxious symptoms, for example. Nor is it your imagination that as the office fills up, it gets exponentially louder. Decibels are measured on a logarithmic scale, so while going from 10 to 20 decibels of sound means it’s 10 times louder, an increase from 10 to 30 decibels means there’s 100 times more sound. So, even “low-intensity noise,” as described in one 2000 study, feels louder than it should be.

Science has also proven your coworkers really are the most bothersome things in the office. A 2017 survey found that understandable human speech and lyrical music were the most distracting types of noise, and a similar 2013 analysis reported that hearing short snippets of conversations wreaked major havoc on workers’ focus. That rumbling air conditioner may get on your nerves a little bit, but you’re most likely to lose focus if your neighbors start chatting or a supervisor asks someone a question.

The most obnoxious type of conversation may be the “halfalogue:” when you can hear one side of a phone call but not the other. These are uniquely irritating because we don’t get the whole story. Our brains kick into gear trying to figure out what’s going on, even if it’s a conversation we really don’t want to hear (looking at you, guy who talks about his skin conditions with his doctor at lunch.)

Unfortunately, it can’t be completely designed away. A Finnish study found that while better acoustics did improve work performance, especially regarding noise from distant desks, they didn’t do much to counteract chatter from nearby coworkers. That leaves us with a quandry: how do we limit noise and still get our jobs done?

Control the noise you make

When shushing the office, there are three factors: the source of the noise, its path, and the person who hears it. Naturally, the path to a quiet office starts with managing the source of any sound, so focus on the one you have the most control over—yourself.

Lead by example. Set your phone on silent, play music through headphones, take personal and work calls away from the open space when possible, and redirect friendly chats to spaces such as the kitchen or coffee nook. Humans are one of the few animals that regularly use and imitate mutually beneficial behavior, so if your coworkers see you turning down the volume, they’ll tend to follow suit.

If you’re looking for some extra focus, use a white noise app and some earbuds. White noise isn’t static, but rather a consistent noise across all audible frequencies. It evenly fills your ears and makes it harder for sound to punch through. That said, don’t blast a white noise app over speakers without asking your coworkers, as it may just add to the clamor for them. Also, be wary of sound fatigue. Listening takes work, even if it’s subconscious, and it’s been shown that the more effort you have to put in with your ears, the more tired you get.

Invest in a few sets of earplugs, potentially several with different levels of noise control. For a complete hush, turn to the federal government: earplugs that meet Occupational Safety and Health Administration certification standards block the ear canal with an airtight seal. You can get reusable earplugs that soften with your body heat and conform to your ear, but standard foam plugs, found in drug stores and hardware stores, will also work. If you’re concerned about missing a call, use “high-fidelity” earplugs designed for musicians and performers, which reduce the overall decibels hitting your eardrums while retaining the frequencies you need for good hearing.

Limit other noise as well. If you have a squeaky chair, get some WD-40 or another type of lubricant to take the noise out. Use quiet keyboards and mice, which will limit the clatter and clicking. When you eat, do so in the kitchen instead of at your desk. And if all else fails, take a walk, slip out to spend a few hours working from a coffee shop, or otherwise give your ears a rest.

Hard, flat surfaces reflect sound, so get rid of them. Modular acoustic panels, textile art like tapestries and wall hangings, and rugs can reduce the auditory annoyance of sound bouncing off hard floors and walls.

Bring some rugs and other soft surfaces and lay them around your workspace, if you can. No, this isn’t just for the homey aesthetic: soft materials absorb sound. Open offices tend to have terrible acoustics, so footsteps, clacking keyboards, and other nonverbal noises can easily punch into your work bubble. Focus particularly on your work area—where sound can reflect off your desk and into your ears—and gaps between tables and other furniture where echoes can build.

And don’t forget plants. “Biophilic design,” which is code for, “having lots of plants around the office,” is another way to keep the noise level down. There’s a good argument for “green” office design in general, as plants boost morale and improve indoor air quality as well.

In terms of sound, plants reduce both overall noise and break up the surfaces in an office that create echoes. You’re not limited to potted plants, either—wall-mounted planters are another useful option that create “green walls” which both look nice and help create some peace and quiet.

One caveat: keep your coworkers and their allergies in mind. Most common office plants don’t dump pollen or otherwise put allergens into the air, but creating an anonymous suggestion box online will let people express any concerns privately. Also remember that somebody needs to water the plants, so be ready to volunteer some time.

Bringing your coworkers on board can also drop the office’s noise level. It’s not so much about scolding your colleagues as it is working as a team to reduce noise.

For example, dividing the office into loud and quiet sections can help. The quiet area might have materials for sound absorption and reduction and rules about noise limits, while the loud area may be a good spot for meetings, conversations, and a workspace for those who are more sociable. If there’s not enough room in the kitchen for everyone, work out a lunch schedule so everyone can eat away from their desks.

Don’t forget, we can’t control how we sound. Everyone’s pitch and timbre is different, and there’s going to have to be a degree of patience and respect among everyone to work together for a quiet office. But with a little teamwork, some personal effort, and a bit of interior design, an open office doesn’t have to be a sonic hell.