Go get the cake before you get that bottle of wine. 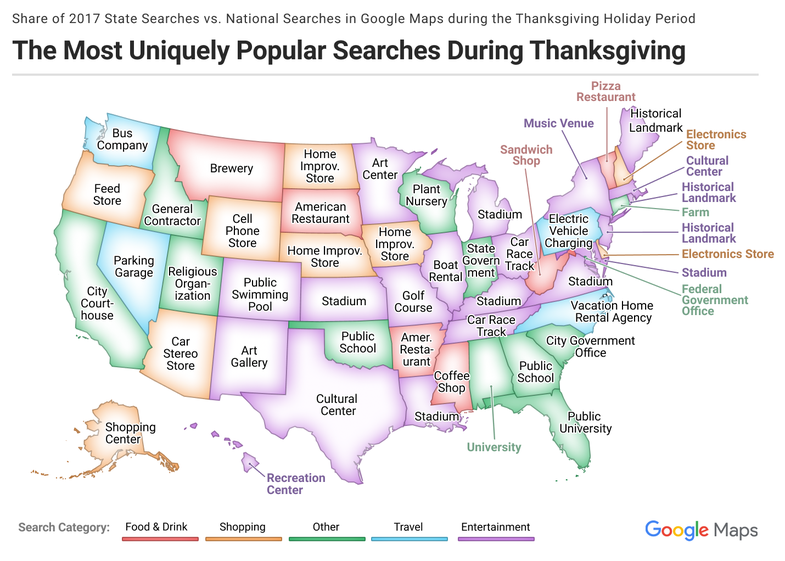 More than a billion active users find their way places using Google Maps, which provides the company with monstrous piles of data about where those users go, how they get there, and what they do at their destination.

This year, Google took the data it collected from Maps users during the 2017 Thanksgiving holiday and crunched the data to find out what times are particularly busy when it comes to driving on highways, visiting local restaurants, and even going to the movies. The results turned up some interesting trends that could help users avoid busy roadways and shopping centers.

Here are some of the things they learned.

Thanksgiving Eve is for buying booze and cakes

A study of popular visit times, which tracks when users go to various businesses, found that early Wednesday afternoon is the most popular time to hit up the bakery and early Wednesday evening is prime time to pick up a bottle from the liquor store. Friday night, after all the Black Friday shopping is done, people flock to the movie theaters. Looking at the overall chart of visiting times, late afternoon Wednesday and noon on Thursday seem like great times to stay home.

In order to analyze this kind of data, Google looked at information from devices with location services enabled. Google anonymizes this data so it doesn’t track back to individual users. If you had Google Maps running at all last year, your information could be part of the aggregate data used to determine all this.

Driving on Wednesday is predictably terrible

If you expect bad traffic on Wednesday evening before Thanksgiving, you won’t be disappointed. It’s somewhat surprising, however, to see traffic still spiking into “heavy” territory, even after midnight across all 25 cities Google looked at. Black Friday traffic, however, mimics that pattern of a typical Friday morning commute.

To get this data, Google analyzed the total number of cars on the road “determined by the speed and location of Android phones that have location services enabled,” according to the portion of the study dedicated to methods.

The Google blog post includes a tool that lets users input their desired city as a destination and then find out when the optimal drive time windows may be.

While this is a cool demonstration, you’re probably better off using something like Waze, Google’s other navigation service, which offers more real-time traffic information. Just this past September, Waze gained compatibility for Apple’s CarPlay tech, which allows it to sync with a car’s in-dash navigation system.

The search data is boring if you’re not a robot

While traffic and visiting data are interesting to Google, search is still fundamental, and the company shared some of its search trends for the 2017 Thanksgiving holiday as well. There aren’t many big surprises on the list, but you can certainly see regional trends if you look at the map or use the online tool that lists popular queries.

While the results aren’t exactly enthralling, the process by which Google put the lists together is interesting.

In short, if you use any Google Service or product over the weekend, you’re probably contributing to data gathering initiatives like this one. It’s the same kind of technology that enables features like Google Assistant’s ability to warn you if it thinks delays on your daily commute are going to make you late for work.

So, while this data is very useful to robots, in this case, it’s at least somewhat useful to us, especially if you don’t mind going to pick up that bottle of wine before you go get the cake.